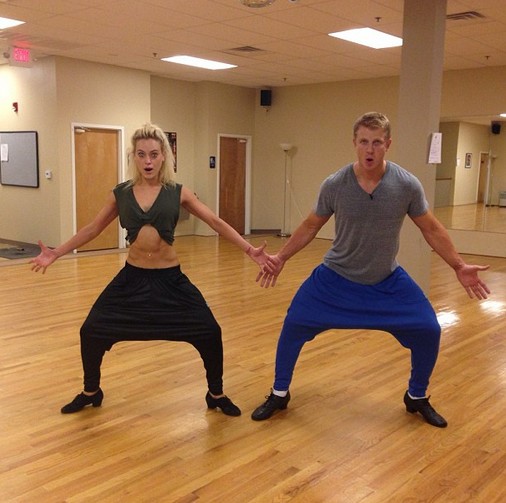 This week Dancing With the Stars will be dancing to one of my favorite themes LATIN. Season 16 top dancers continue into week seven Monday, April 29 with the seven remaining stars ready to dance the night away. Dancing With the Stars will be honoring LATIN night with three hot and steamy dances for the couples to perform. This week will also be a special week of scoring and qualifying. One lucky couple can make themselves exempt from elimination and the torturous over the top nervous tension of waiting for the dreaded announcement of who will be leaving the ballroom.

Let’s discuss our dancers and how they will fair this week in what is usually know as the week of love and sexy dancing. Kellie Pickler and Derek Hough will be dancing the Samba and the physical connection they exude on the dance floor should keep them in the number one spot this week.

The Disney star caught a break this week as Zendaya and Val Chmerkovskiy are dancing the Paso Doble which should have Val breathing a sigh of relief because he dodges a bullet with the sexy dances.

Alexandra (Aly) Raisman and Mark Ballas will be dancing the Salsa and with all those gymnastic moves they should have no problem shaking their way into one of the top three positions.

Pigeon toed Jacoby Jones and Karina Smirnoff will be dancing Salsa and lucky for Jacoby the Salsa is all about hip action and not foot action so he will regain a top spot on the leader board.

The General Hospital Star Ingo Rademacher and Kym Johnson will be dancing the Rumba and I feel Ingo should do well as his acting skills should come in handy with this sensual dance of love.

The most exciting part of the night, at least if you are a fan of The Bachelor should be Sean Lowe and Peta Murgatroyd – that pair as well as Andy Dick and Sharna Burgess are dancing the Rumba. Clearly the weakest links left on the show will be trying to show love and sex appeal in this dance – but I doubt that will ever happen.

This would not be DWTS if we did not have a twist and beside the highest overall scorers being exempt from elimination on the Tuesday night show the other six couples will compete in a dance-off to earn extra points to pump up their scores. As always the couple with the lowest score will be going home Tuesday night and Celeb Dirty Laundry will be covering this show live as usual.

The night will have an emotional story that will be shared about a Boston Marathon survivor who happens to be a dancer – she lost her foot but vows to dance again.  Frankly I don’t want to hear about tragedy when I watch DWTS – why do the networks insist on doing these things?  DWTS had no problem going on with their show the very night of the terrorist bombing – are they feeling guilty now?

The music will be by Colombian musician Juanes. There should be tears of joy and happiness as Latin weeks kicks off Monday, April 29th at 8pm on ABC. Don’t miss our amazing live coverage right here at Celeb Dirty Laundry!