BY M Myers on May 6, 2013 | Comments: one comment
Related : Dancing With the stars, Dancing With The Stars Season 16, Preview, Reality TV, Spoiler 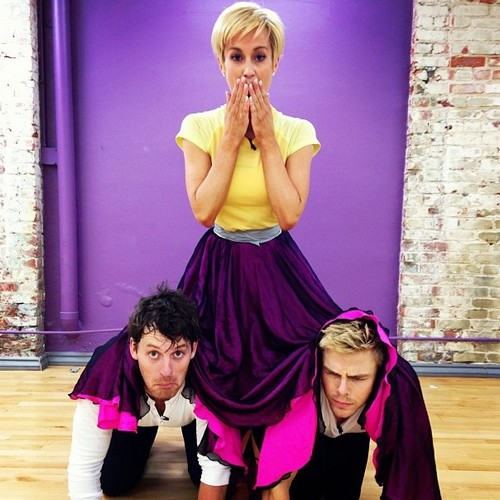 There are only six remaining couples on DANCING WITH THE STARS. Andy Dick was eliminated last week, leaving Aly and Mark, Zendaya and Val, Kellie and Derek, Jacoby and Karina, Sean and Peta and Ingo and Kym. The Trio Dances are back!! Week 8 of Dancing with the Stars should be very entertaining. The celebrities have to do two dances this week, one with their partner and one as part of a trio with an eliminated pro or troupe member. This will be the first time this season where each couple will perform two routines attempting to impress the judges.

In the first round each couple will dance a style that they have not yet done, which is great because this will show everyone’s growth, strength and weakness. However, in the second round each couple will dance as part of a trio which will allow us to see the interaction with the stars with other dancers. This could be very challenging because the stars will have to learn choreography with two partners and switch between dancing with each of them throughout the number. It may seem easy, but it is complicated.

In addition this week, viewers will be called to action on Twitter to choose new dance styles for each couple for the following week of competition. The new styles will include, Afro-Jazz, Disco, Flamenco, Hip-hop, Lindyhop and Charleston.

Sean and Peta will be dancing the Tango individually and then joined by Sharna Burgess for the trio dance showcasing Jazz. This was a good combination since Sharna and Peta are best friends or was this just a strategic move on Peta part.

Ingo and Kym will be dancing the Foxtrot individually and then joined by Lindsay Arnold for the trio dance creating an amazing Jive. We hope that with two beautiful ladies and one hot dance the actor can create a character that will do the JIVE justice.

Jacoby and Karina will be dancing the Viennese Waltz individually and then joined by Cheryl Burke for the Paso Doble as the trio dance. This week will be a challenge for Jacoby because both dance focus on foot action and Jacoby has been struggling all season with his foot work. Both dances will not be a touchdown for Jacoby this week and he will find himself in the bottom again.

Zendaya and Val will be dancing the Foxtrot individually and then joined by Gleb Savchenko for the trio dance attempting a hot and steamy Salsa. “Double the Russian equals Double the Fun” This week could be a challenge for the Disney Star on the trio dance because it will be hard to create a sexy salsa with a minor. Although this week will be a challenge for Zendaya the judges love the Disney star and at this point in the competition she can do no wrong so she will survive another week.

Aly and Mark are at the top of their game and will be performing the Argentine Tango individually and the Jive with Henry Byalikov as their trio dance. Aly should be one of the top winners of the night as the Jive is perfect for her with her gymnastic back ground and Mark will definitely chorography a great routine that displays her flipping ability.

Lastly, Princess Kellie and Prince Derek will be performing the Viennese Waltz individually and the Paso Doble with Tristan as their trio dance. Kellie has been great all season long and I see no reason why she and Derek will backslide now. Tristan with Derek will bring an element to the dance floor that will show why Kellie and Derek are the couple to beat.

The night will be interesting to say the least.  With the finale approaching the last six competitors will go all out and will certainly be bring their A Game.   Don’t forget to come back Monday at 8PM for our live recap of Dancing With The Stars!