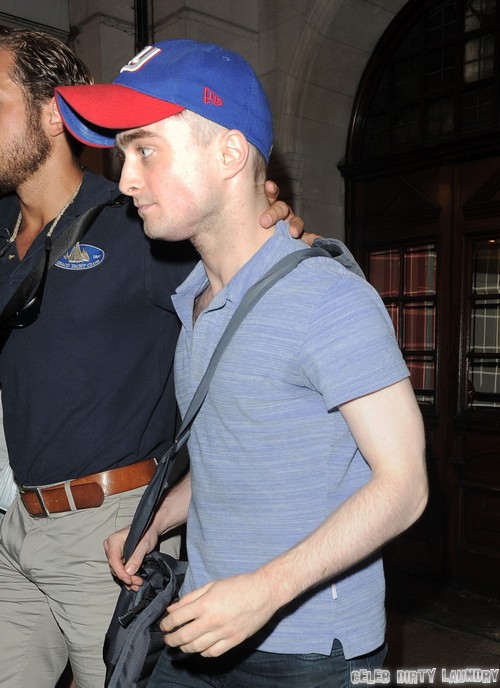 According to a new report from In Touch Weekly, Daniel Radcliffe’s ‘alarming’ appearance has his fans worried about a possible alcohol relapse. As we know, Daniel has admitted to having an alcohol addiction over the past few years, and although he has claimed to be sober for a while now, you never really know for sure if they’re telling the truth.

According to sources, it’s Daniel’s ‘frail’ and ‘red-faced’ appearance at his play The Cripple of Inishmaan in London that’s causing his friends to worry. A source explains, “His face was sweaty and his eyes were very wide. He was trying to avoid being seen by anyone.” An eyewitness adds that Daniel ‘looks seriously ill’, explaining, “There’s more than Red Bull and tiredness causing that.”

I wouldn’t be surprised if this story turned out to be true. Daniel has admitted that he was drunk during filming the sixth Harry Potter film, and he actually remembers going to work most days while hungover or drunk. If he can work on a studio movie while drunk, what’s to stop him from doing a play while drunk? I really hope that it’s not true for his sake, because even if it hasn’t affected his work until now, it will eventually start to eat away at his life and career. We’ve seen it happen with so many celebrities, and nobody wants to see it happen to such a promising young man.

Daniel’s made such amazing choices in the past few years, and until there’s more concrete proof that he has relapsed, I choose not to believe this story. If he really was ‘red-faced’ and ‘frail’ throughout one of the performances, it could also be that he was trying to go method. After all, he’s playing the ‘cripple’ of Inishmaan.

What do you guys think? Truth to this story? Let us know in the comments.

Daniel Radcliffe tries to keep a low profile as he leaves the Noel Coward Theatre in London, England on July 18