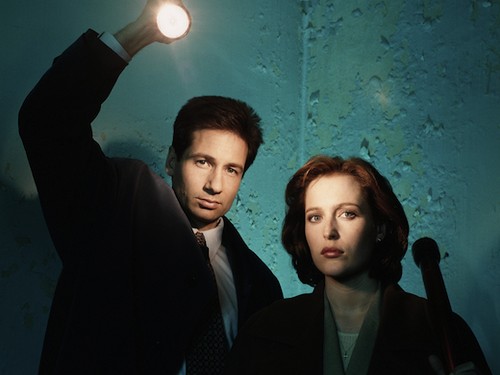 The X Files has to have some of the longest running, most die-hard fans around. It went off the air well over a decade ago and both David Duchovny and Gillian Anderson both still feel major love from the fans who catapulted the characters of Scully and Mulder into Cult Classic fame. David and Gillian have both stumbled through some personal issues and rocky relationships but have managed to remain close. Really close according to recent reports which have the duo shacked up in an apartment in NYC. It seems that the real life relationship between the actors may play out similarly to the way their characters were involved. Always assumed, major chemistry, but no solid visual proof of a love affair.

Luckily, Comic Con fans attending the X File panel will get to see David and Gillian together and see for themselves what kind of vibes they are throwing off. The rumored couple is also doing an autograph session together after the panel so I’m sure in a few short weeks we’ll be getting some first hand accounts of what’s really going on!

Why is it that X Files fans want to see David and Gillian together? I have to admit, I’m a fan of the show and I’d love to see them have whatever sort of happily-ever-after they can muster, but even I’m not sure why I’m pulling for that! Is it because they’ve been intertwined for so long that they just seem like a natural fit together, kind of like peanut butter and jelly? Is it because we’ve never really seen their characters have that closure of what comes next and so seeing the actors have it would be the next best thing? Tell us your thoughts in the comments below!