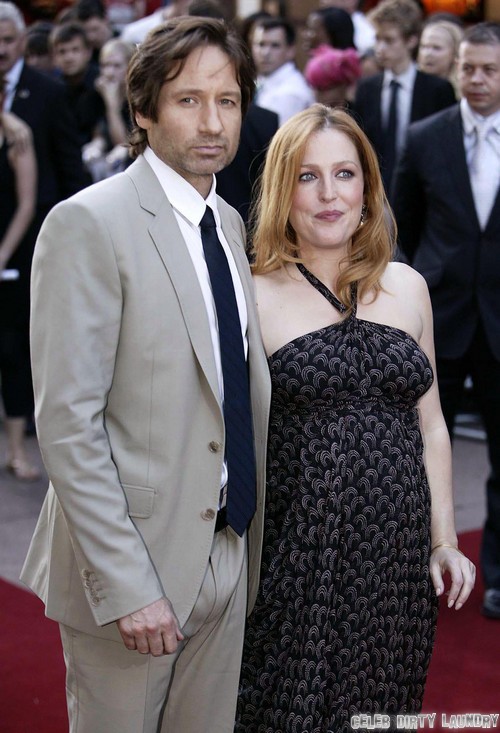 Gillian Anderson and David Duchovny were spotted looking pretty cozy at Comic-Con, leading to rampant gossip about the status of their relationship. CDL has previously reported many times about our sources catching David and Gillian together at his apartment in NYC, and from the body language between these two at Comic-Con, it’s pretty obvious that there’s something going on.

Eyewitnesses who were at Comic-Con said that the former on-screen couple had a very ‘intimate’ level of comfort together, and they were acting ‘like husband and wife’. Considering that they were playing partners in X-Files for several years, that’s not to be unexpected. However, their banter isn’t exactly platonic and often tends to be filled with innuendos and little inside jokes. They often joke about sex in interviews, and if you didn’t know anything about their history, you would probably think they had been going out for a long time.

And maybe they have been going out for a long time, but just doing a bang up job of hiding it. There are still many passionate David and Gillian/Mulder and Scully shippers that would love to see them together, and them publicly announcing a relationship might affect their privacy.

What do you guys think about Gillian Anderson and David Duchovny possibly dating? From their body language and chemistry together at Comic-Con, do you buy that there’s something going on? Regardless of what they say in interviews, body language rarely lies. Then again, we weren’t at Comic-Con personally and there’s only so much still pictures can tell you. However, the panel [for the 20th anniversary panel for The X Files] was packed with fans, and there are many videos that have made their way online that have parts of the Q & A session. Let us know your thoughts in the comments.