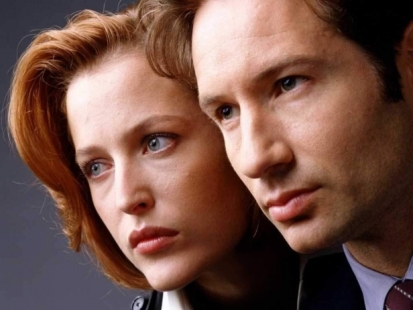 The X-Files had its 20th anniversary panel at Comic-Con Thursday evening, and it reunited Gillian Anderson and David Duchovny – at least, in public – what did they do after the show?

Gillian and David touched upon a lot of topics, including the discussion of whether they would ever consider working together again. David says, “I’ve always felt like there was something so special about Mulder and Scully. I love Gillian (but) It would have to be something I can’t think of to cross that line.” Or maybe you’re scared of messing up your off-screen bond, David?

Then, with the question about whether Mulder and Scully ever hooked up romantically, David cheekily replied, “I’m not sure if we ever did, did we?” Gillian adds, “Something happened because we have a child.” The flirting continued when a fan asked what Mulder and Scully would do on a date, to which Gillian immediately replied, “Have sex” with David adding, “Then, maybe dinner?”

This isn’t the first time that Gillian’s brought up sex in relation to what she and David would do if they were left alone. At a convention a month ago, Gillian was asked about what she would do if the world was ending, and her answer was to have sex with David. I mean, they clearly have a great rapport, whether it’s romantic or not. But with so many fan encounters and sources claiming that Gillian and David have been spotted at his apartment in NYC numerous times, it’s hard to believe there’s nothing going. Especially after seeing them together at Comic-Con, and how easily they flirt with each other. There’s a reason that Mulder and Scully is one of the greatest television couples ever, and a large part of that is owed to the chemistry between Gillian Anderson and David Duchovny.