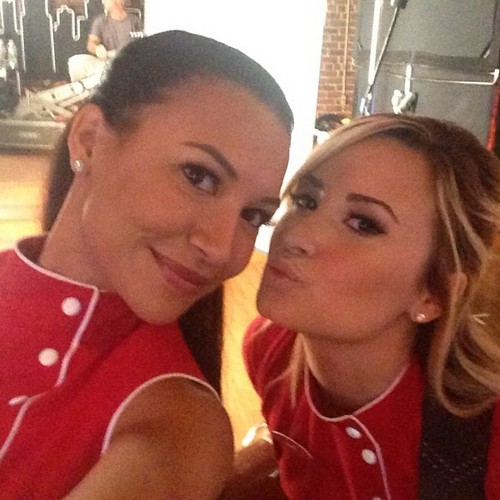 Demi Lovato recently shot her scenes as Naya Rivera‘s love interest on Glee, and Naya reveals that she made out with Demi to get into character.

Naya explained in a new interview, “I made out with her in my trailer before we shot the scene, so I just warmed her up.” When asked about her boyfriend’s reaction, Naya just stated, “He was like, ‘Oh man. I’m out of town. I’m jealous.”

Demi has a small, multi-episode arc as Naya’s love interest on the show, but it definitely seems like she’s making the best of it. Glee marks Demi’s return to acting, which has been on pause for two years while Demi’s been recovering from health issues and working on her music career. The last time Demi was seen on television was with Sonny With A Chance, which ended its run 2011.

Her role on Glee is also rumored to have landed her a possible role on Pitch Perfect 2, which she is perfectly suited for.

In the same interview, Naya Rivera also spoke about losing Cory Monteith, and like the rest of her cast, she still seems really devastated by the loss. She said, “We’re definitely taking it day by day. Everybody’s really just leaning on each other and trying to do good work.”

The Glee cast has already shot the memorial scene for Cory’s character, but it’s no doubt still a difficult, ever-present memory while they’re on set.

What do you guys think about Naya’s comments on Demi and Cory? Are you looking forward to watch Demi’s guest spot on Glee? Let us know your thoughts in the comments.