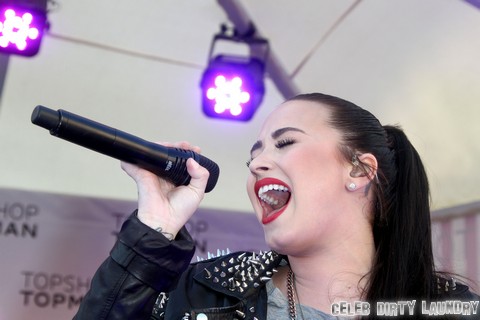 Demi Lovato has signed a book deal with Feiwel and Friends, which is a children’s imprint of Macmillan. This deal includes a multi-book confirmation, including Demi’s memoir.

The first novel will be titled Staying Strong: 365 Days A Year, and will focus on Demi’s messages about maintaining a strong body image for young girls, and how to deal with the pressure, trials, and tribulations of being a teenage girl.

I think it’s smart that Demi’s expanding her career into a veritable business and brand name. Lately, it seems like more and more celebrities are becoming business oriented, which is becoming a necessity in today’s media and Internet culture. Singing, dancing, acting, or any one particular talent lasts only so long, unless you’re Adele or Meryl Streep. In Demi’s case, she’s a decent singer, dancer, and actor, but she’s not the best at any of them, far from it. Keeping that in mind, she should be capitalizing on her fame right now, and writing a book is the perfect way to do it.

The public is fascinated with Demi’s life, including her personal issues and love life. It’s not clear whether Demi will address her love life in her books, but considering that she will be writing a memoir, I think it’s safe to assume that she’ll at least touch upon it – especially because she’s revealed in the past that her self-esteem issues were partly derived from her romantic endeavors at the time.

Lovato will also next be seen in Fox’s Glee as the love interest to Naya Rivera’s Santana Lopez.

Will you guys be buying Demi’s memoir when it releases? Her first book is set for release in November 2013, and her subsequent books will reportedly come out within the next two years.