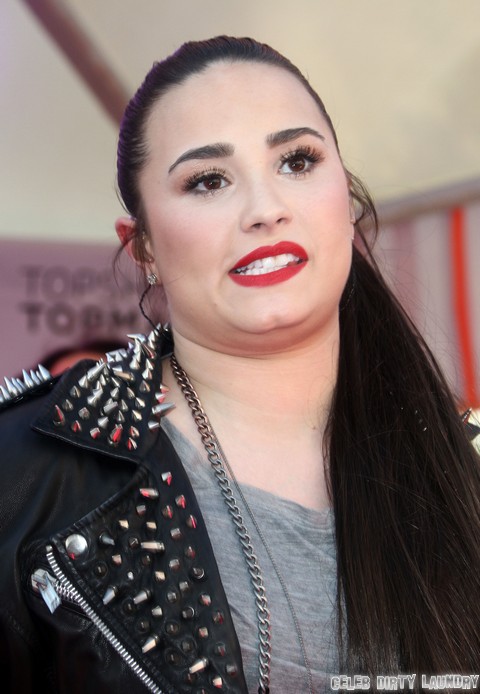 Since exiting rehab for depression and an eating disorder, Demi Lovato has been careful about dating. She and Wilmer Valderrama have been dating on and off since 2010, and often enjoy flirty public gestures. He’s supported her career by appearing at X Factor tapings, and it seems that months of hard work are paying off: the two are finally (almost) a couple again.

Demi and Wilmer spent Valetine’s day together in Los Angeles, where they spent hours at Takami Sushi & Robata Restaurant. “They stared into each other’s eyes the whole time,” a source told Us Weekly, print edition March 4, 2013. “They ordered almost everything on the menu, but they didn’t touch it for at least an hour.” Instead, they engaged in a “really intense conversation,” after which they ate dinner and cuddled.

The ex-Disney star has always been open about her personal struggles in hopes of helping fans through similar situations. In the past, she’s identified as a “clingy girlfriend or getting jealous,” but has slowed down her dating life, learning to “finally trust and love” her partners. With two years of invested time, we’re sure that Wilmer is in her inner circle. What can we expect when they become official? Demi will continue to work on a well-balanced life, instead of the “very unhealthy” habit of “devot[ing] all of [her] time to a guy.”

The pair spent all day together, stopping at Topshop, where sources say they were publicly making out during the grand opening. Demi seems to be in a stable enough place to not throw herself at random guys. I think that every step she takes is deliberate, and that she’s decided Wilmer is a healthy companion to keep. Of course, it’s a bit odd that she’s only 20 and he’s 33, but what is age? Edward Cullen was like, 80 years older than Bella, right? And people still liked him! Do you think Demi is ready to date? Is Wilmer a good pick?