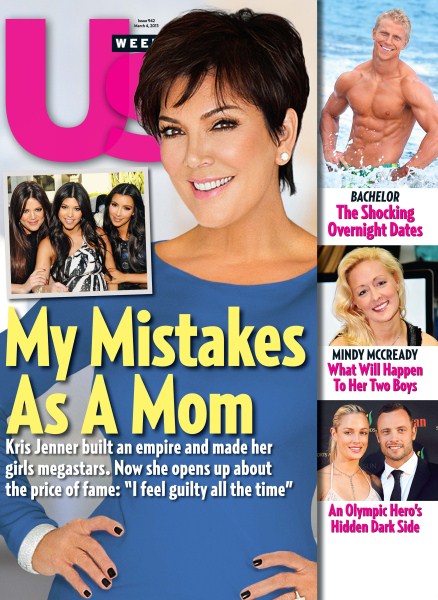 Kris Jenner suffers from a “God Complex”, a momager fever, and a penchant for overreaction. This axis of evil doesn’t necessarily make one a “bad” person, but it does give entertainment writers enough leverage to rip you apart like a dead cow at an alien abduction.  In Touch magazine recently cast a gloomy light over Jenner and her parenting methods, but Us Weekly decided to take the route less traveled and gave Jenner the opportunity to “slam many of the misconceptions about her parenting and relationships with her daughters.” Okay, then.

In the latest issue, Jenner exclusively tells the magazine, “I feel guilty all the time because I can’t be everywhere at once.”  (Obviously not – she’s not wonder woman, she’s horror woman). Regarding the exploitative nature of her now both infamous and famous reality television show, Keeping Up With The Kardashians, Jenner insists that it is absolutely not exploitative, saying, “My family could have said, ‘Are you out of your mind?’ But everyone was excited!” Well, they were only excited because Jenner most probably held a gun against their heads and forced them to sign indecent disclosures. That’s how Jenner rolls – like a gangsta with Chanel pumps and a Botox butt.

She also denies that she “forced” Kim Kardashian to marry Kris Humphries, stating, “If it wasn’t real, she wouldn’t have divorced so quickly. But I feel terrible that anybody feels personally affected.”

Yes, Momager, you should feel terrible.

It’s about time Jenner owned up to her faults and admitted that she isn’t perfect. There are certain things you can control in life, such as smiling and positive thinking and playing with Lego blocks and eating cupcakes. Unfortunately, Jenner cannot control the outcome of everyone’s life in her family, although she tries her damndest. For that, and only that, Jenner should be given one-arm applause.