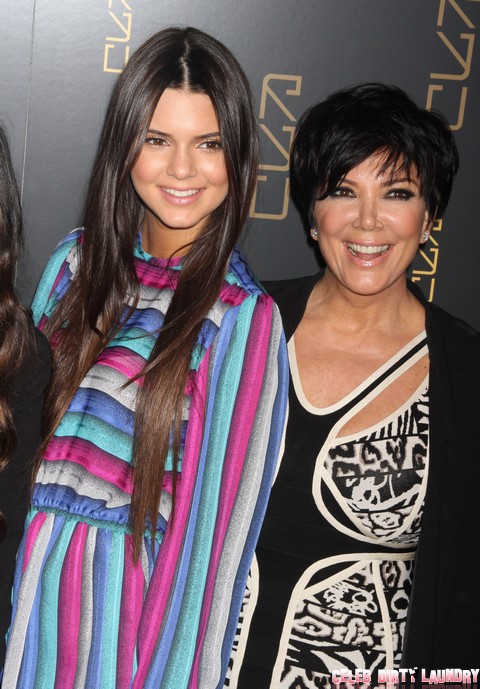 Kendall and Kylie Jenner have said that they have no desire to have their surnames be Kardashian. The twosome, 15 and 17, sat down with Glamour magazine where they revealed that they happy to be known as the Jenners, and not the Kardashians – not to forget that Robert Kardashians Sr. is not their father anyway. Then again, these girls are smart enough to realize that it’s better to be a Jenner anyway – a surname of an Olympic champion while Robert’s surname has been totally ruined with Kim’s sex tape scandal along with her infamous divorce.

“We’re full-throttle Jenners!” Kendall said when questioned if it is an issue for her that she’s a Jenner and not a Kardashian. She added: “We don’t have any desire to be Kardashians.” No desire to be under a surname that brings up ‘sex tape’ to everyone’s mind in an instant… Kendall is smarter than we thought. “All that matters is that we’re a family,” adds the sweet and innocent Kylie, who lashed out at the tabloid magazines last week claiming she wasn’t Bruce’s biological daughter.

Kendall and Kylie were later quizzed about if they think being on a reality show has affected them in anyway – whether it’s more of a good thing than bad, because with a lot of fame always comes a downside. But these two say that they are happy being on television due to the fact that all of the episodes they have done will be looked at as memories in years to come: “Our family is closer because of the show. And when we are older, we’ll have the memories on tape,” insists Kylie. “If some of those moments hadn’t been filmed, I wouldn’t remember them!”

The interview quickly turned personal when asked what they made of the paparazzi and social media targeting them because they come from such a famous family that they were pretty much born into fame and money. Kendall shared that she doesn’t take her life for granted, but sometimes it’s creepy to see older men (photographers) follow her around when she’s still an underage girl. “We appreciate everything that we have, but we don’t remember what it’s like to be normal kids who aren’t harassed by the paparazzi. I hate that,” she says.

“We’re underage girls. I don’t want to be followed by random men I don’t know. It can also be hard to deal with other kids who are jealous or mean. I can’t post a picture on Instagram without being criticized…” Kylie continued: “No one really knows what we are like. People read about us on Twitter, but they don’t know what we do all day long. We don’t really have privacy, but we have an aspect that people don’t know about.”

Check out more of Kendall and Kylie in Glamour’s March issue!