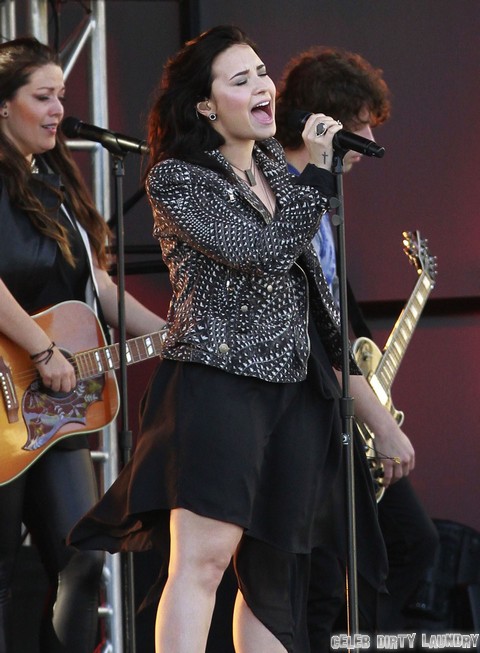 According to a new report from Star Magazine, Simon Cowell is demanding that Demi Lovato ‘lose 20 pounds’ before the premiere of the X Factor USA. A source tells the magazine, “Cowell believes she has ballooned since the season two finale in December — and it’s bugging him. Simon doesn’t expect Demi to be supermodel skinny, but he does want her to look like she’s in shape.”

The source adds, “He’s set a weight-loss goal of 20 lbs. for Demi and asked her to work hard on it through the spring and summer.”

Okay, usually I’m all for stories about how showrunners and executives are shits and make their actresses/judges/hosts lose weight to appeal to their male audience. In this case, I don’t buy it. Lovato has been outspoken about her battle with eating disorders in the past, and it’s hard to buy that anyone would try to pressure her into losing 20 pounds.

Of course, the magazine does try to do damage control on that angle, and this ‘source’ explains, “Cowell is very supportive of [Lovato’s past experiences with an eating disorder] and is going above and beyond to make sure she loses weight in a healthy way.” And demanding that she lose 20 pounds is being supportive?

Besides, Demi hardly has enough weight to lose, and 20 pounds would have her looking emaciated, not skinny or ‘in shape’. Now, I have no doubt that she faces pressure to lose weight – it is Hollywood, after all. However, I don’t think that pressure comes from Simon Cowell or anyone on X Factor. The show is not based on Demi’s looks, but her name. That being said, this report – if not factually accurate – could have still been leaked by someone on the show or network’s publicity team. Demi in the news means more viewer ratings for their show.