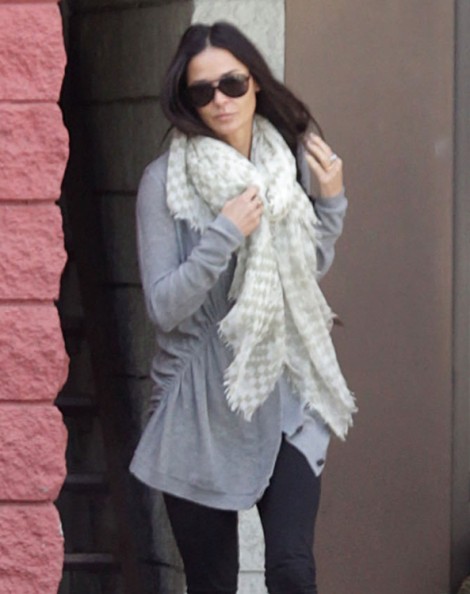 I know I should be hyper critical of everything I read in the British tabloids but I SO want this to be true for Demi Moore. Yoga lover, and fellow friend of the rehab, Russell Brand, is becoming more than a friend? I approve! It’s perfect! Yes, Russell looks like Nigella Lawson’s twin. Yes, he was married to Katy Perry and now is grossly linked to John Mayer but he’s also freakin’ awesome so I am a super fan of this hook up/booty call/spiritual love match/friendship for sure. It’s not like Demi can cast the first stone anyway. She’s linked to mega douche Ashton Kutcher so they both have some unfortunately baggage. They almost cancel each other out – almost.

But I know, I know. I shouldn’t get my hopes up. The Sun reports the two have been hanging out since Christmas because of their shared interest of the “spiritual workout” (whatever the hell that means). Apparently Russell’s been teaching Demi all kinds of new yoga moves. Oh really….

So let’s pro and con this.

Pros: Russell is closer in age to Demi than her past loser hook ups. Russell has a great career which actually includes movie roles (a major plus since that could make Ashton jealous). And they have a lot in common with all their new age nonsense and rehab issues. Also, Russell’s uber smart and articulate which will probably make Ashton feel dumber than normal.

Cons: Didn’t Russell and Katy break up because he wanted children? Demi’s past her baby making years so will that hurt the couple? Can’t you see Russell adopting though? I could, so maybe this could be a pro after all because the experience could help them grow as a couple. I know, I’m getting a tad ahead of myself on this one but I don’t care because I’m EXCITED!

And that’s all I’ve come up with – many pros and only one con that should really be a pro. You’ve probably noticed many of my pros are pros because they inflict some sort of negative reaction from Ashton. This is immature because I am immature. But, come on, this could be the first adult boyfriend for Demi post-divorce. Let’s let her use Russell’s strengths to gloat a little! Have a heart!

Do you like the Demi Moore/Russell Brand hook up rumors? Could he be just what Demi needs?