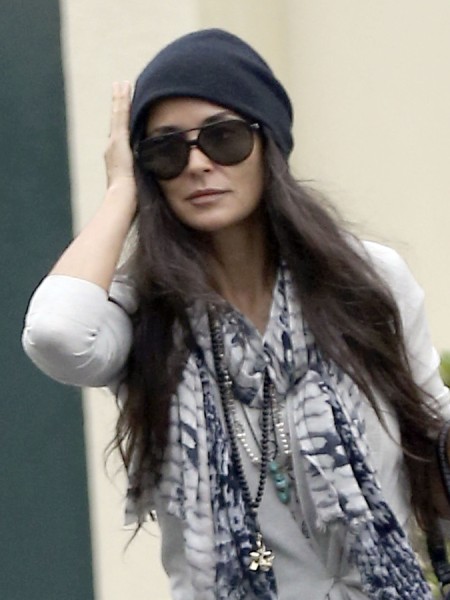 This weekend at Brown University Scout Willis celebrated her graduation. Too bad only one parent bothered to show up. Bruce Willis was there to support along with his wife and other daughters but Demi Moore was a no show. Her busy yoga schedule must have gotten in the way. If not that, then the rift between her and her daughters must be still going strong. But this is ridiculous! It’s a pretty big deal when your kid graduates from any college let alone an Iv. What is Demi Moore’s problem?

Now let’s give little old Demi the benefit of the doubt first over this graduation. Scout Willis might have demanded she stay away. Rumer has been seen with her mother recently leading people to believe that all the daughters have buried the hatchet with the emotional Demi but perhaps that’s not the case. Scout might not be ready to let go of the grudge yet. Grudge in question? The girls were rumored to have cut off ties with Demi over her basket case behavior with Ashton Kutcher. Apparently they weren’t a fan of her continued cougaring and she wasn’t a fan of their continued friendship with her ex. The fact that she’s playing hardball in the divorce over money she really doesn’t need probably isn’t helping the situation.

But here’s the deal, and maybe I’ll be a horrible mother one day, but who the hell cares what Scout Willis wants? If I’m her mother and she’s graduating from a school I PAID FOR then I’m going to be there. I’ll stand in a corner. I won’t talk to anyone. I’ll let you ignore me all you want but I’m going to be there because it’s a big day and I SHOULD be there. Screw your grudges. I’m the adult. Despite your college graduate status, I’ll still make the mature decisions whether you like them or not. Because pictures don’t do this day justice. Pictures don’t full fill you with the pride you as a parent deserve for putting a kid through college. I know I probably don’t  know all the facts, and maybe Demi met up with the group after the ceremony, but this was a bad move. Demi should have been there, no? Sound off.

Side note: I’m not ordinarily a huge fan but doesn’t Bruce look super hot? I love his little proud smiles. Too cute!