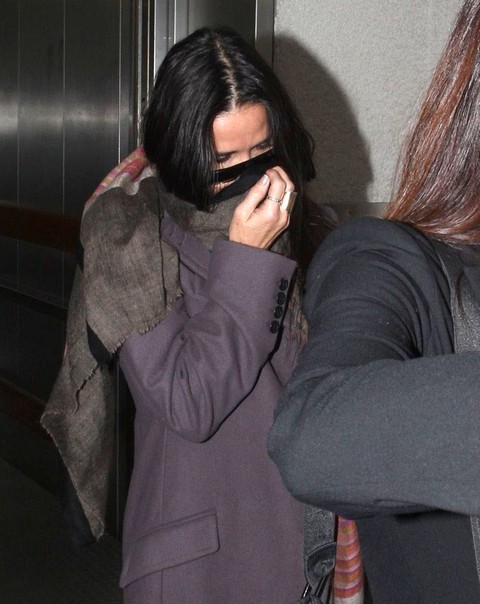 Demi Moore’s daughters have had enough of her antics. The 50 year old mother of Rumer, Scout and Tallulah Willis has been acting out, presumably in response to her pending divorce, and driven by her insane jealously of Mila Kunis. The girls realize that their support and encouragement has fallen on deaf ears. They now want to distance themselves from their mother and who can blame them. Demi’s daughters had recently reconciled with her but it appears that she has pushed them away again with her outrageous behavior.

Life seems to have imitated art for Demi. Her role as Jules in the 1985 brat pack movie St. Elmo’s Fire is a self loathing, self destructive woman. Jules always wants to be the center of attention. She is promiscuous, an alcoholic and a coke addict. Jules decides she has had enough of life and locks herself in a bitterly cold room hoping to freeze to death. When Rob Lowe’s Billy Hicks is finally able to enter the room he gets Jules to open up. She talks about her daddy issues and her bad relationship with her step mother. Billy talks to Jules about St. Elmo’s Fire to get her to calm down and accept his help and support.

Demi is estranged from her husband, Ashton Kutcher, who is 15 years her junior. Demi began acting out soon after their separation. She is no longer the object of her husband’s attention and affection. Demi’s past seems to have reared its ugly head again. She had a very rough childhood, raised by a single mother in a trailer park. Demi has also spent time in rehab for substance abuse.

In January Demi was hospitalized after suffering a drug-induced seizure. Upon her release from the hospital she checked into a treatment center for exhaustion and to improve her overall health. This event made Demi’s daughters decide to cut all contact with her. Whatever she learned in rehab obviously didn’t do anything to improve Demi’s frame of mind. Some of her recent embarrassing acts include dancing along side Lenny Kravits in Miami until 4am. She also began dating a younger man. She dated her daughter Rumer’s friend Vito Schnabel, 26, for a short time before he unceremoniously broke up with her. There are reports that Vito was angry because of Demi’s partying at the Art Basel event.  It was also reported he was tired of the photographers circling him and Demi. Her antics have all the makings of another mid-life crisis.

Rumer, Scout and Tallulah’s dad Bruce Willis continued to be involved with Demi and their girls following their divorce in 2000. Bruce has now taken his daughter”s side to distance himself from Demi. Per a source with the New York Daily News, Rumer is the one making the decisions regarding the girls” involvement with Demi. Lets hope that losing her family will finally make Demi face the reality that Ashton is not coming back to her. She needs to start over once again.