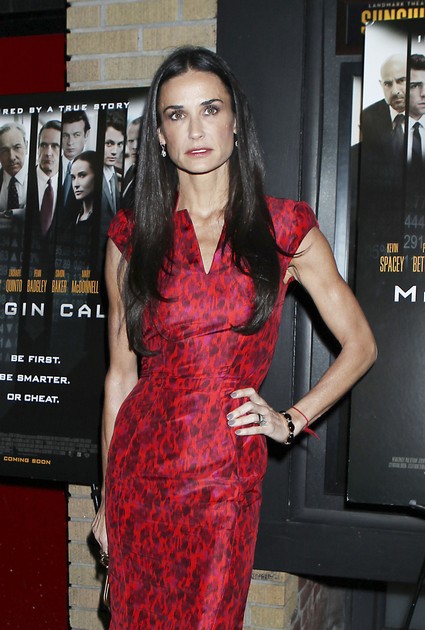 Demi Moore was partying with her daughter Rumer Willis present when she collapsed and went into seizures. At the 54 second mark of the 911 tape (00:54 mark) you can hear the caller ask, “What is the address Ru?” Can you beleive what bad mother Demi has become? Demi was clearly smoking something and inhaling nitrous oxide with her daughter right there – partying right along. What a degenrate bunch of decadent trash.

Demi Moore is a model for us all. A model of what to avoid in pursuing our own lives. Superficial, vain, promiscuous, self-pitying, and eventually suicidal describe Demi and her path through life in a nutshell. The eventual destination of the path she chose was the 911 call in Demi’s panicked friend told an emergency services operator she had “smoked something” and was suffering from “convulsions” on the night she was rushed to hospital poisoned by drugs. Demi’s moral compass is seriously out of whack.

When you read through the transcript of the 911 call you will just how low Demi has fallen.

Demi was rushed to Sherman Oaks Hospital on Monday evening, after suffering a seizure at a birthday party she was hosting at her home, and details of the frantic 911 call have now been released.

Demi’s friend can be heard saying: “We need an ambulance here as soon as possible. Why is an ambulance not on its way right now? She smoked something. It’s not marijuana, but it’s similar to, it’s similar to incense, and she seems to be having convulsions of some sort.”

The dispatcher then asked the terrified pal if Demi, 49, was conscious and breathing.  The friend replied: “Yes, well semi-conscious, barely … And she’s convulsing. She smoked something, but the reaction was accidental. It’s accidental.”

Another friend, a woman, then takes the phone and reveals Demi had taken another substance before the smoking incident.

The operator asks: “Is she breathing normally?”  To which the second person responds: “No, um, not so normal, but more sort of shaking, convulsing. But burning up … She’s been having some issues lately with some other stuff, so I don’t know what she’s been taking.“

The name of the first substance was wiped from the recording that was released on Friday because of federal patient privacy regulations.

As we reported on Celeb Dirty Laundry, paramedics arrived at Demis Franklin Canyon house in California shortly before 11pm on Monday and after treating her for 30 minutes at the property rushed her to Sherman Oaks Hospital.

Now it’s been widely reported that Demi has been anorexic and was hooked on Adderall and Red Bull for a long time. We reported months ago that Demi appeared anorexic – too bad her friends didn’t intervene then… .

One can only imagine the dirt that the tabloids will dig up on Demi now. But whatever it is, you can count on us to report it!