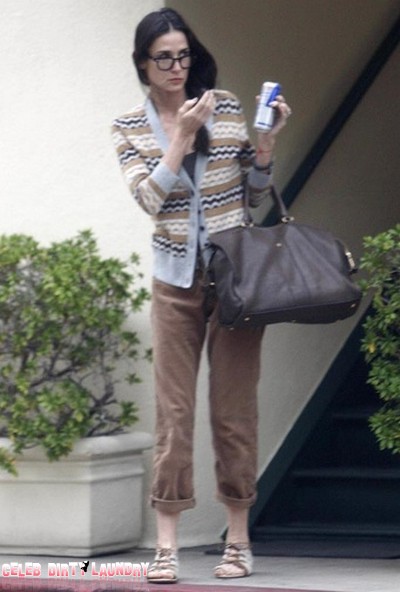 Demi Moore was dangerously thin at 98 pounds at the start of October after she stopped eating as a result of Ashton Kutcher’s infidelity with Sara Leal – but now Demi appears to have lost even more weight and is looking absolutely grim.  The usually glamorous and formerly curvy Hollywood star appears pale and drawn these day and tries to hide her painfully-thin figure.

Ashton was not to be seen at Demi’s side for the premiere of her new flic, ‘Margin Call,’ last month. Very unusual for Ashton not to offer support to Demi at such an important event. The 49-year-old Demi truly appeared disturbingly thin at the New York premiere two weeks ago but her subsequent further weight loss raises concerns about her ability to cope with Ashton’s affair and the apparent demise of their relationship.

It seems recent marriage woes continue to take their toll on the 49-year-old actress, who clutched an energy drink as she left a Los Angeles nail bar.

Sexy 22-year-old-blond Sara Leal claimed she slept with Ashton – on the night of his sixth wedding anniversary – and then for Demi’s added pleasure Sara went public with a detailed account of her night with Ashton.

Sara told the Sun that Ashton congratulated himself on his conquest after they slept together.

Sara said: “The last thing I remember him saying was he did a good job.”

Isn’t this just what every wife wants to hear?

Rumor has it that Ashton has presented a list of promised changes he says that he is ready to make in order to win his way back into Demi’s good graces: these include spending less time on Twitter, not flirting with other women, and spending more time on their Kabbalah religion.

Well after Ashton’s total Twitter f**k-up with the ‘JoePa Scandal’ it should be easy for him to stick to at least one of the promises.