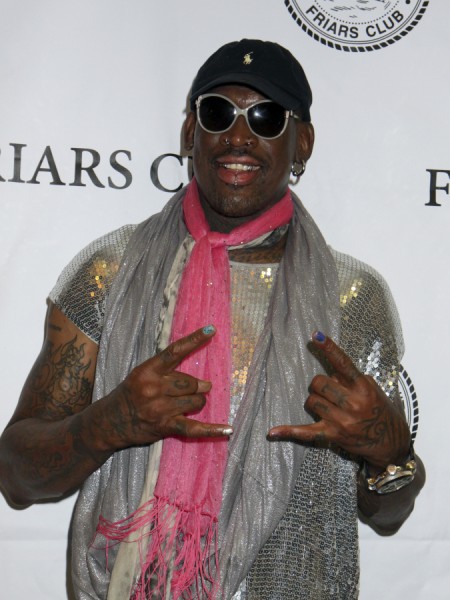 Let me start this story by saying I love Dennis Rodman. I grew up in the Chicagoland area during the double three-peat. Most of my childhood memories are watching the Bulls play with my family. I can still remember the glorious 72-10 season like it was yesterday. And Rodman was so very much a part of that. So it’s hard for me to rag on him for anything. I usually shake my head and let him and all his issues go in one ear and out the other. But this… this might be too much. The Dennis Rodman/North Korea comments might have jumped the shark for me.

TMZ has amazing video of Rodman blasting President Barack Obama for his efforts regarding North Korea. You’ll remember Rodman struck up a relationship with the missile-loving young leader, Kim Jong-un, a few months ago and is taking it upon himself to negotiate with him to get American detainee Kenneth Bae out of the country. Rodman’s returning to North Korea and hopes he can convince Kim Jong-un to release Bae from his shady 15-year sentence of hard labor.

It seems Rodman’s only too happy to meet up with his “friend” again but you get the sense he feels a bit put upon for having to do it. He blames Obama for having to ask this solid from the leader. “I’m gonna try and get the guy out…. It’s gonna be difficult…. We got a black president [who] can’t even go talk to [Jong-un] … Obama can’t do shit, I don’t know why he won’t go talk to him.”

I don’t know how the president being black has anything to do with his ability to talk to North Korea but whatever. Wouldn’t it be amazing if Dennis could actually get the guy freed? That would be the craziest thing ever. I’m sure Bae doesn’t care if Carrot Top did it as long as it happened.

What do you make of the Dennis Rodman/Kim Jong-un bromance? Is it shady that Rodman considers him a friend?