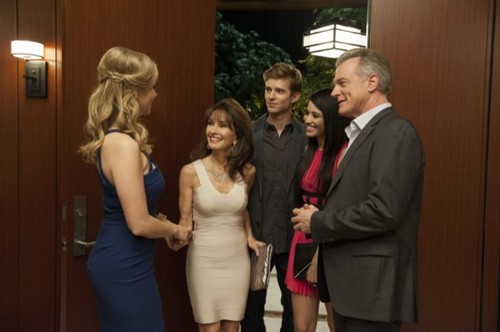 Tonight on Lifetime DEVIOUS MAIDS continues with a new episode called, “Hanging the Drapes.”  On tonight’s show Carmen has trouble going through with a favor for Alejandro. Taylor and Michael have exciting news.  Did you watch last week’s show?  You can read a full and detailed recap, right here.

On last week’s show Evelyn blackmails Rosie so she can spend more time with baby Tucker. Zoila is upset when Genevieve presents her with an interesting proposition for Valentina. Marisol discovers some new information about Flora and grows suspicious of Michael. Carmen is troubled by Alejandro’s reaction to Odessa’s illness.

On tonight’s show Valentina worries Remi will hate her when he returns from rehab. Rosie wants Spence to defend her honor after Adrian propositions her. Marisol learns her son was caught up in nefarious activities. Carmen has trouble going through with a favor for Alejandro. Taylor and Michael have exciting news.

Tonight’s episode is going to be another fun one, which you won’t want to miss. So be sure to tune in for our live coverage of Lifetime’s Devious Maids Season 1 episode 10 — tonight at 10PM EST! While you wait for our recap check out the sneak peek of tonight’s episode below.

Rosie’s plan to get Spence to work on his marriage couldn’t any bigger of a disaster than watching her former lover tear into his combative wife. Perri had suggested they try couples counseling. Spence scoffed and only grudgingly agreed. Perri tries to engage him again by declaring all of her own problems and when he’s about to dismiss her she loses it and tells him what his problems are. She may be a raging b*tch but Spence is a wuss. Rosie attempts use cake as a diversion. It doesn’t work.

Remi is back from rehab and far from being mad at Valentina; he kisses her. He believes she saved his life and he’s no longer afraid about pursuing a relationship. So much so that he asks her mom’s permission to formally date her. Zola liked what he did however he really should get permission from her husband as well.

If only all they’re worries could be easily swept away. Carmen has a problem. She agreed to do one of Odessa’s chores without fully knowing what it was. She agreed to shave Alejandro’s back. His hairy monkey back. Marisol suggested she asked for a raise for all of the hard labor. If she were to ask for too much then maybe Alejandro won’t ask her to do it.

Rosie was doing some grocery shopping when she was apprehended by Adrian. He wanted to invite her to a party. A very exclusive party she would be paid extra for. Rosie is so creeped-out she takes the first chance she sees to quickly flee from him. When she returned to the house she tried to tell Spence about it yet he appears unconcerned. Rosie wants him to go over to Adrian’s and threaten him but that’s not really Spence’s scene.

Perri was right. Spence is a wuss. Rosie is only now just getting that. She accused him of not protecting her and her husband would have taken Adrian to task.

Carmen is dying to find out her son’s secret. He knows who’s the father of her baby. He only just connected the dots. It was his co-worker also known as his partner. What Carmen didn’t know was that he had been running a secret drug business. Carmen is furious once she hears. But she is his mother and she’ll continue to try and help him despite her disappointment.

Anyway she has to protect her boss. Taylor is happy to find out she’s expecting but Michael is worried over how he should tell his ex, Olivia. He feels that he owes it to her to tell her in person. After all they were married for nearly 20 years. Surprisingly, Olivia takes the news well. She doesn’t overreact or try her usual antics. She simply wants him to be happy.

Taylor on the other hand has qualms about telling everyone her news. She’s spilling with excitement and Carmen sees the best way to take advantage of that. She suggested Taylor throws a party to announce her pregnancy. And not the usual kind of dinner party. She gets Taylor to have catered party using the same company her son’s “friend” works for. That way she grill me when she gets the chance.

Remi was invited over for dinner at Valentina’s. Before he goes in he has to get used to Valentina’s father, Pablo’s, humor. Pablo likes to make drug addiction jokes. Which Remi is fine with but there is one problem. He greets Pablo but didn’t know his last name. It’s fine for Pablo but no so much for Valentina. She was angry that Remi didn’t know her last name. Later when he was confused over if she had any siblings; she goes off on him.

Her mother gets her to reveal her fears. Valentina is afraid Remi has only seen her as the help. Taking that into consideration Zola tells her to quit. She’ll be leaving to go to school soon and so it doesn’t matter.

Carmen’s problem fixed itself. Her original plan to up her price didn’t work. Alejandro was willingly to pay but Carmen did end up cutting him with the razor. She confessed to having her eye close. And that really did hurt his feelings. He let her see where he was most vulnerable. Carmen does feel sorry afterwards and apologizes.

Then there’s Spence. In order to defend Rosie’s honor he went over to Adrian and tried to hit him. Tried is the word. Before he could fully throw the first punch he slipped on the wet floor and gave himself a concussion. Peri find out what he did and instead of making fun of him she’s actually being nice. She likes this new Spence that’s willing to protect a woman from sexual harassment. If only she knew that her husband is kind of doing the same thing to Rosie. Spence wouldn’t be too honorable then.

Taylor’s dinner party starts off well. She got two unexpected diners but otherwise everything was going to plan. Both hers and Marisol’s. Marisol spoke to the dealer and even though he didn’t know Flora’s baby daddy’s name he could easily point him out at the dinner table. Remi was the father of Flora’s baby.

Marisol had only found out that shocking news when she saw Olivia outside. It was abnormal for her to take Taylor’s pregnancy so easily. She hung herself on the tree directly in front of the dinner table at the happy couple’s home.
Is she still alive?