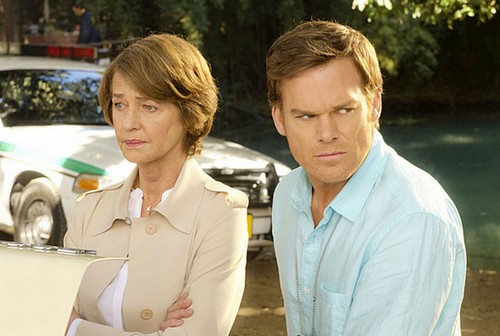 Tonight’s new episode of DEXTER was great we found out how Dr. Vogel knows about Dexer.  I have my suspicions about her!  I cannot wait until next week and we have managed to get our hands on a sneak peek video and some spoilers to wet your appetite for next week’s episode 3 “What’s Eating Dexter Morgan?.”

On tonight’s episode Miami Metro continued their hunt for the Brain Surgeon, while Dr. Vogel enlisted Dexter to do her bidding based on her own personal experience with her previous patients. Dexter found out why Vogel knows about him, it sees Harry let her in on the secret.  Debra continued to track down her PI case and has to take matters into her own hands.  Did you watch tonight’s episode?  We did and we recapped it here for your enjoyment.

Spoiler alert: If you’re one of those people who doesn’t like spoilers, stop reading now! We have some juicy spoilers for you about the season 8 episode 3 of HBO’s “Dexter”

Official Showtime synopsis of next week’s episode: “Dexter continues his manhunt for the Brain Surgeon. Dr. Vogel tries to prove to Dexter that he’s perfect as a psychopath. Debra’s PTSD kicks in and she makes a desperate plea to confess to LaGuerta’s murder.”

On next week’s show Deb is going to get it into her head that she has to confess to LaGuerta’s murder to clear her conscious, oh crap…. How is Dexter going to deal with that?  Will he be able to help her.  Dr. Vogel does not think he can.  Since Dexter is the reason she is out of control, how can he hope to help her?

Not only has Deb killed LaGuerta but it looks like she killed El Sapo, so Deb is in a bad place.  She is almost picked up for a DUI and is still drinking and drugging.

Dr. Vogel wants to know why Dexter did not kill Deb when she found out his secret, yikes!  Dexter does not trust Dr. Vogel and neither do I.

Next week Dexter continues his search for the Brain Surgeon.  I’m going to throw this out there. I think Vogel might be the killer…  What do you think?  Let me know!

Dexter episode 3, “What’s Eating Dexter Morgan?” airs on Showtime on July 14th, 2012.   Check out the preview video and some pictures below of episode 3 and let us know in the comments below what you think!  Are you enjoying season 8 of Dexter?

[CLICK ON THE THUMBNAILS BELOW TO ENLARGE BELOW TO MAKE LARGER]