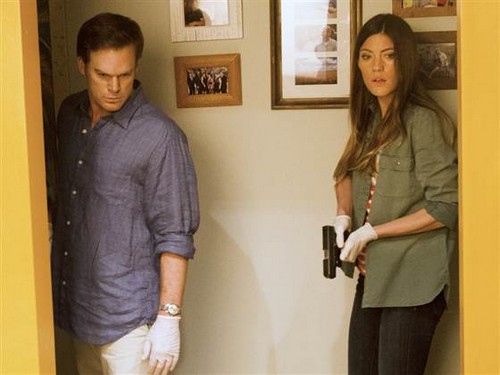 On last night’s new episode of DEXTER the show opened with Deb, Dexter and Vogel are sitting in her house. Vogel says Deb it appears you tried to kill Dexter and yourself. Deb tells Vogel yes but then she saved him. Dexter tells Deb you only had to save me because you tried to kill me, and that if she had she would have left Harrison a orphan. Dexter goes on to say his whole life all,he has ever done and tried to do is protect Deb. (Deb is like so your protecting me how? By letting me find out your a serial killer?) Dexter tells her he isn’t perfect ,and that being her brother isn’t easy (that is kind of harsh, I mean he isn’t exactly a picnic either). Deb is trying to explain that she has been stuck in a f**king fog for months. Dexter is to pissed to care, he tells Deb that she wasn’t listening when Vogel explained that he is stupid when it comes to understanding human emotions (that’s b.s. nobody fully understands human emotions, not even a shrink). Vogel explains that Debs PTSD caused her to think irrationally. Deb tries to explain. Dexter is not having it. Dexter tells them before all this happened he was looking for a serial killer which according to Vogel is all that he is good for. Dexter opens the door to walk out, he tells Vogel not to forget to write all this down,and then shuts the door and leaves. Vogel is having a hard time grasping that Dexter was mad and hurt (you know because he is incapable of such trivial things).

Dexter escapes to the quiet of his car and decides that no one needs family therapy, or a family for that matter.

Dexter is at home and Harrison is asking to watch cartoons instead of going to school. Jamie ask him if he has plans for the night. Dexter tells her he isn’t sure. Deb calls he ignores her (now she knows what it feels like). Deb leaves him a message asking if they can talk. Jamie is asking Harrison if he wants a banana or a apple in his lunch. Jamie tells Dexter she is thinking about inviting Cassie over for dinner. Dexter tells her fine. Jamie tells him she meant at Dexters she thinks they will hit it off. Dexter is distracted by Harrison but says fine to Jamie. Debs voicemail comes in, he ignores it. Dexter grabs his bag and keys and leaves for work.

Dexter walks into work and muses in his head how today is the first day he is glad that Deb isn’t their and how he can’t wait to get to the lab and just be alone. Quinn stops him and tells them they need to go for a briefing, Dexter is like now, Angie says now would be good. Dexter is less than thrilled. They all go in and sit down. Masuka ask if they wonder why he is smiling. Quinn says nope, never. Masuka sits down next to Dexter and tells them that he has a daughter, Nikki the one Angie showed up. None of them can believe it ( I’m right there with you). Angie says that poor sweet child. Masuka wants to know what he thinks of them both being dads. Dexter pats him on the back and says congratulations. Quinn thinks he should be leery. Quinn is in charge of the briefing, about Norma from last week. They think the boss is the one that killed her, Quinn wants Dexter to go with him to get a swab to find out. Angel walks in and says the girl Yates left to die identified him as her assailant and he wants to go to Yates place and search it.

Matthews tells Quinn the Hamilton’s ( the guy they think was doing Norma) are good friends of the department ( pretty sure you know where this conversation is headed).
Quinn gets in the elevator.

Over at the Hamilton’s they meet him out by the pool and tell him they need a cheek swab. The want to know if it was him sleeping with her. Hamilton admits it, and that his wife found out. Hamilton says Norma came by to pick up a few things she left behind and they ended up having sex. Dexter spots his son. Hamilton scolds him for being out there and tells him to leave. Hamilton tells them he has security cameras that show her coming and going. Deb calls Dexter but before he can answer she hangs up , he calls back and she doesn’t answer. Hamilton’s son tells Dexter his dead is capable of a lot of things but murder isn’t one of them. (Bet the son did it, uber creepy kid that he is).

Vogel is at home with a cup of tea. She sits it on her desk while she turns on some music on her laptop (some sixties song) she picks up her tea and sits in a chair close too her window so she can go through her mail. Someone is outside and like a second later her patio table comes crashing through the window. It’s Yates he tells Vogel if she tries to get away he will kill her. Debra calls Vogel and it goes straight to her voicemail. Deb walks in Vogel’s and sees the mess, she knows she was kidnapped.

Dexter is in Yates backyard where they have dug up some of is past victims. Angel tells Dexter they have found three bodies so far. Masuka says he broke their toes one by one and in a specific order. Deb shows up and tells Dexter that Vogel is missing, Dexter figures out that Yates has her. Deb wants to help him find her, Dexter tells her no. Deb tells him she couldn’t let him drowned because she couldn’t imagine her life without him in it. Dexter ask if they go back to normal. Deb says they were never normal. Dexter tells her they have to find Vogel. Deb follows him into Yates house. Dexter gives her a list of houses to plot out.

Yates has Vogel tied up and he throws her on a couch. Yates tells her he doesn’t like Dexter going through his house and his things. Vogel thinks he is mad about the brain surgery. Vogel tries to convince Yates to stop what he is doing and that Dexter will find him. Yates tells her he wants him to and puts the pillowcase back over her head.

Angie and Quinn are talking to a guy with a food cart. They ask if he remembers seeing Hamilton a few days ago, he says no he didn’t see him but he saw his son. Quinn calls Angel and tells them what he found out. Angel tells him he will let Matthews know.

Masuka and his daughter are at another food cart getting lunch. Masuka ask her why she looked him up, Nikki tells him partly for school and partly because her mom died. When they get up order she says she forgot her purse in the car, Masuka tells her he will pay for the food so she orders cheese for her burrito.

Dexter is back at the police department trying to figure out which houses Yates may have worked on and if they would be empty and he would take Vogel to one. Dexter goes to Angel and ask if they got any hits on his credit card. Angel tells Dexter they haven’t, they woman from the bank tells Angel that Yates has used the ATM by morning side park two days in a row. Dexter now knows what area to be looking in.

Matthews is doing dirty deeds. He gave the Hamilton’s a heads up and then threatens Quinn with the Sargent’s job if he pushes it any further or brings the son in for questioning.

Deb has Elway helping her look at the list of houses Dexter gave her. Masuka shows up to talk with Deb. Masuka wants her to check his daughter out, he wants to make sure she isn’t up to anything.

Dexter gets home and finds Quinn and Jamie and Cassie in his apartment. Quinn offers him a beer. Dexter seems thrown off. Quinn ask if he remembers Cassie, Dexter says yes. Dexter tells Jamie he has something he needs to do. Jamie is super angry and tells him if he doesn’t go through it she will leave and he will be stuck with Harrison all night. If he stays she will stay with Harrison so,he can do whatever he needs to do. Dexter fakes like he is going to get wine and calls Deb instead. Deb has 10 houses for them to look at Dexter has 9. Dexter tells Deb he will call her back in five minutes. Dexter calls Cassie over and tells her he needs to leave but doesn’t want Jamie to get mad at him. Cassie tells him she will take care of it. Dexter tells her maybe they can reschedule. Cassie says she would like that. Dexter calls Deb and says he will be at her place in five minutes.

Yates tells Vogel to be still or he will restrain her. Yates takes off her shoe (the left one) he gets out his toe cracker weapon and gets ready to break Vogel’s. She is freaking but manages to stay calm. Vogel tries to talk Yates down but when that doesn’t work she slaps him, then she slaps him again. Second time turns out not only brings blood but its also the charm. Yates puts her foot down and goes to clean his mouth. Vogel tries a door it’s locked. Vogel grabs Yates phone and calls Dexter on it. Dexter answers and he hears Vogel and Yates talking. Deb calls Elway to trace the call. Elway tells her the number is from 157 Montgomery. Dexter heads that way. Yates notices the phone is on. Vogel yells for Dexter. He goes faster.

Deb and Dexter get to the house and Dexter breaks the door down. Dexter notices a little drop of blood on the floor. They hear thumping upstairs. They go in the first room they come to. Deb opens the closet, Vogel is sitting in it tied up. Dexter cuts her loose. Deb ask where Vogel is, Dexter knows he is under the bed. Next is like something straight out of a Jason movie, Dexter takes the curtain rod and rams it through the bed and into Yates. Vogel ask Deb if she is ok. Deb is fine she just wants to clean up and get out of the house.

Back at Vogel’s she is giving him the brain jars to dump with the body. Vogel is glad they are getting along again. Dexter grabs the bag.

Vogel and Deb are on the boat with him when he dumps Yates body. Vogel and Deb want to know he brought them. Dexter tells them he wanted to be with family. ( There are no words for how creepy that scene is to me. Perhaps it’s telling).

If you want to read some spoilers and see a sneak peek to next week’s episode, we have them for you but I warn you they are spoilers [CLICK HERE]