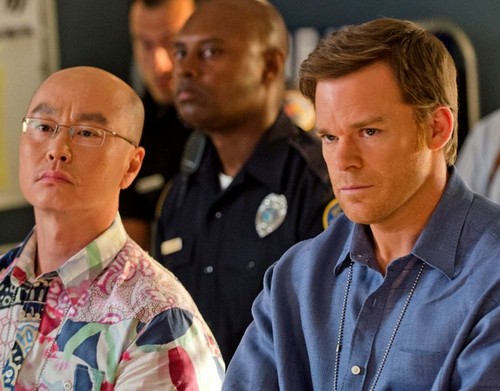 Tonight’s new episode of DEXTER was another great episode.  A good percentage of the episode was concentrated around Yates and his kidnapping of Dr. Vogel.  Deb and Dexter managed to put their differences aside and managed to work together to save Vogel.  Deb and Dexter’s relationship changed again tonight and I am curious to see where it will go from here.  I cannot wait until next week and we have managed to get our hands on a sneak peek video and some spoilers to wet your appetite for next week’s episode 6 “A Little Reflection.”

On tonight’s episode Deb and Dexter were in therapy with Dr. Vogel.  Dexter was pissed because he thinks all he has done his whole life was try to protect Deb and she almost made his son an orphan.   Quinn was running the current case at the police station the vic was Norma.  Quinn and Dexter head over to do a cheek swab of Mr. Hamilton, who admits he was sleeping around with Norma.  Meanwhile Mr. Hamilton has a creepy son, Zack.  Jamie tried to fix Dexter up with the next door neighbor Cassie and Dexter was not thrilled.

Meanwhile Yates kidnaps Dr. Vogel, Deb found her gone and she alerted Dexter that Dr. Vogel was gone.  Dexter realized it was Yates who did it and Deb told Dexter she wanted to help him.  Dexter was determined to find Yates and Dr. Vogel.  Dr. Vogel tried to psychoanalyze Yates but he was not falling for it.  Yates attempted to break Vogels toe and told her she could take the pain and stop struggling or he could just kill her right now.  Vogel took a different approach and started bossing Yates around and slapped him silly which made him back off.  While Yates was cleaning up Vogel got his cell phone and called Dexter.  Dexter and Deb ran to try to rescue her.  Did you watch tonight’s episode?  If you missed it you can read our full and detailed recap, right here.

Spoiler alert: If you’re one of those people who doesn’t like spoilers, stop reading now! We have some juicy spoilers for you about the season 8 episode 6 of HBO’s “Dexter”

Official Showtime synopsis of next week’s episode:  “Dexter monitors a young sociopath. Dexter and Deb get back to normal, but are surprised from a visit from Hannah.”

On next week’s show Hannah is back and you know that is not going to be good.  Also Mr. Hamilton’s son, Zack who Quinn suspected killed Norma is back at it and he is on Dexter’s radar.  Dexter realizes the young Hamilton is drawn to blood like him and hopes if he follows him he will discover the truth.

The picture gets a little murkier when Dexter realizes that Zack is a patient of Dr. Vogel.  More reasons I don’t trust that women.  Dexter confronts Vogel about Zack.  Vogel wants Dexter to teach Zack Harry’s code.  Dexter is shocked!

Deb is having some problems with men again next week and Quinn gets passed over for the Sergeants job.  Angel decides to give someone else the job because Quinn is making no progress with the Norma case.  Quinn tries to get Dexter to help him, not realizing that Dexter has his eye on Zack for himself.

Meanwhile as Dexter stalks Zack, Zack is not unaware of what he is doing and he tells Dexter he knows what he is up to.  It appears that Dexter and Vogel are going to be at odds about what to do about Zack Hamilton.

Dexter episode 6, “A Little Reflection” airs on Showtime on August 4th, 2012.   Check out the preview video below of episode 6 and let us know in the comments below what you think!  Are you enjoying season 8 of Dexter?