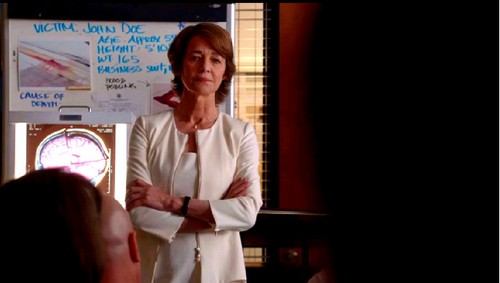 Tonight’s new episode of DEXTER was another great episode.  Poor Deb is still spiraling out of control and confessed to Quinn that she killed LaGuerta.  Dexter was desperate and he finally asked Dr. Vogel if she could help.  Dr. Vogel claims she can, oh my ….  I cannot wait until next week and we have managed to get our hands on a sneak peek video and some spoilers to wet your appetite for next week’s episode 4 “Scar Tissue.”

On this tonight’s episode Dexter tracked down another potential serial killer from Dr. Vogel’s list Yates. Quinn celebrates his passing of the Sergeant’s exam by defending Debra’s honor in a fight.  We found out that Quinn actually got 3 points less than the other candidate but Angel promoted him instead.  Dr. Vogel begins treating Debra for her PTSD.  Dexter found Dr. Vogel’s files on him and got really upset.  Dexter felt like a lab rat.  Dexter went after Yates and missed.  Did you watch tonight’s episode?  We did and we have a full and detailed recap here for you!

Spoiler alert: If you’re one of those people who doesn’t like spoilers, stop reading now! We have some juicy spoilers for you about the season 8 episode 5 of HBO’s “Dexter”

Official Showtime synopsis of next week’s episode:  Dr. Vogel comes into contact with the “Brain Surgeon”. Dexter and Deb try to keep her safe. Masuka learns that he has a daughter.

On next week’s show we will find out if Dexter will forgive her for trying to kill him.  I am betting yes.  It looks like Deb and Dexter are getting therapy by Dr. Vogel.  Dr. Vogel questions Deb about trying to kill Dexter and herself.  Her explanation she found out their Dad killed himself because of Dexter.  Finding out about her Dad committing suicide traumatized her.

Dexter heads back to work and he is glad Deb is not working at the police station anymore.  They are investigating a case and Quinn thinks the killer is the person, Hamilton who had sex with the women.  It looks like Dexter suspects not Hamilton but his son.

Someone comes after Dr. Vogel and kidnaps her and it is Yates.  Yates knows that Dr. Vogel sent Dexter after him.  Deb and Dexter are going to try to save her.

Dexter episode 5, “This Little Piggy” airs on Showtime on July 28th, 2012.   Check out the preview video below of episode 5 and let us know in the comments below what you think!  Are you enjoying season 8 of Dexter?