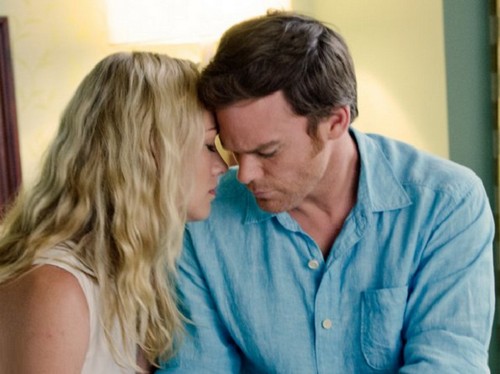 Tonight’s new episode of DEXTER had us on the edge of our seats, and to say that we’re excited but also sad about next week’s series finale episode would be an understatement.  If you are curious about the next episode we have managed to get our hands on a sneak peek video and some spoilers to whet your appetite for next week’s series finale “Remember the Monsters?.”

Tonight’s episode we had Dr. Vogel’s funeral.  We also saw Dexter being torn between fleeing the country with Hannah and Harrison, and taking Saxon out once and for all.  Dexter has changed since he found love with Hannah and he does not want to kill anymore.  Although Dexter could have killed Saxon he decided to let Metro Miami handle it.  He called Deb so she could bring Saxon in and be a hero.  However, unbeknowst to her the Deputy Marshall who was following her let Saxon go.  As Deb came in to get Saxon she found him free and the DM stabbed.  The ending was explosive and if you missed it, we have a full and detailed recap, right here for you.

Spoiler alert: If you’re one of those people who doesn’t like spoilers, stop reading now! We have some juicy spoilers for you about the season 8 Finale of Showtime’s “Dexter”

On next week’s episode Dexter finally comes to an end and it is going to be a crazy episode, there is a lot left to be tied up.  On last week’s episode Dexter, Hannah and Harrison were about to leave Miami and start a new life, but Dexter gets a call.  He finds out that Deb was in the hospital in critical condition.

Dexter is feeling guilty that he did not kill Saxon and blames himself that Deb was shot.  Dexter is feeling an incredible amount of guilt not only for letting Saxon live but he feels he ruined Debra’s life.

Meanwhile Elway and the Deputy Marshall are still looking for Hanna.  Elway believes Hannah is trying to leave the country and he comes to see Dexter.  Dexter makes it clear that Elway should stay away from him.  He warns Dexter not to go down with Hannah.

Dexter series finale, “Remember the Monsters?” airs on Showtime on September 22th, 2013.   Check out the preview video below of the series finale and photos and let us know in the comments below what you think!  How do you want Dexter to end?  At this point it does not seem like it is going to end well for Dexter.