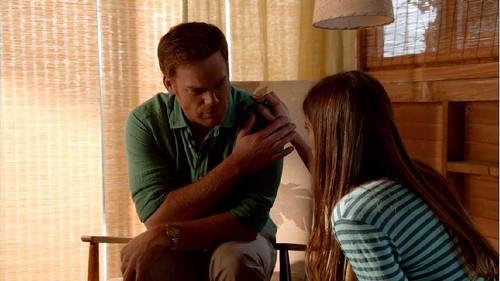 DEXTER returns to Showtime tonight with the penultimate episode of the 8th and final season called, “Monkey In A Box.”  With just one week left before the series ends each episode is jammed packed with action as we race to the finish.  On tonight’s episode will Dexter take Saxon out once and for all?  Did you watch last week’s episode? If you missed it we have a full and detailed recap, right here. So head over to get caught up before tonight’s episode.

On last week’s episode Daniel tells Vogel that he knows what fear looks like because he’s seen a lot of people die.  There’s also a shocking death at the end of the episode.   after weeks of dancing around their attraction Deb and Quinn will finally get together.  Well not exactly get together but they do talk and kiss.

On next week’s penultimate episode Dr. Vogel’s funeral will take place.  Dr. Vogel’s son Oliver Saxon stops by Dexter’s and almost does him in, but Deb saves him.  Deb & Dexter tie him up and Dexter calls Miami Metro so they will find him.  Dexter is moving ahead with his plans to move to Argentina and tries to sell his boat.  He also decides that his daughter Astor can have his car.  Something changes in this episode because we know in the finale Dexter is still in Miami.

Tonight’s episode is going to be another action packed one, which you won’t want to miss, we are down to the last episodes. So be sure to tune in for our live coverage of Showtimes’ Dexter Season 8 episode 11 — tonight at 9PM EST! While you wait for our recap check if you want to read some spoilers and see a sneak peek video from tonight’s episode, go here.

Tonight’s show opens with Dexter cleaning up and missing that Vogel warned him from living in two worlds.  Dexter realizes that he has to remove himself from her life.  He is cleaning up all the notes that Dr. Vogel kept on him.

He has to call in Vogel’s death and he cannot be seen leaving the crime.

Angel questions Dexter about why he was at Vogel’s house.  Both Dexter and Quinn question him.  Quinn tells Angel and Dexter the neighbors saw a white man, 40 in a pickup or car leave.  Dexter wants to help find the killer.  Angel tells him No, he cannot.

Dexter is going after Saxon even though he has had a head start.  Dexter goes home and sees Deb, he tells Deb that Evelyn Vogel is dead.  Dexter tells Deb that Saxon killed her in front of him.  Deb tells him he is sorry. Dexter and Deb realize that without Vogel they would have no found their way back to each other.  Deb asks Dexter if he is going after Saxon and he tells her he is.

Hannah and Harrison walk in.  Hannah gives Dexter their itinerary for leaving.  She asks him if they are still leaving.  Dexter tells Hannah that Dr. Vogel is dead and Saxon did it.  Hannah asks if he can do it so fast and Dexter confirms he can.

It is two days before Dexter and Hannah leaves.  The Real Estate agent tells him people are already coming over to see the place, she expects it to sell fast.  Dexter tells her the house had too many memories.

Harrison is going to stay overnight with Jamie.  Dexter shows his boat to someone he is selling it.  Dexter is called in to see Quinn and Oliver Saxon is there.  Quinn tells Dexter that Saxon came to clear his name in the Cassie case.  Quinn asks him for a DNA sample and takes a swab of Saxon’s cheek.

Dexter tells Deb that Saxon was there to clear his name.  Deb says Saxon has balls.  Dexter tells Deb that he has DNA on Saxon now and he can prove that he is not Oliver Saxon he is Dr. Vogels nutso son.  Deb is curious why Dexter is helping them find Saxon rather than keeping him for himself.

Deb is searching through Quinn’s drawer and finds the engagement ring he bought for her, she is surprised he kept it.

Dexter heads to an old hospital and wonders if it is Saxon’s sanitarium.  He comes upon Saxon’s kill room and Harry appears.  Harry tells Dexter that Saxon will be back it is a special place.  Harry tells Dexter has to die by his hand.  Dexter tells him by anyone’s hand.  Harry remarks it does not sound like the old Dexter.

Dexter finds a computer and all Dr. Vogel’s files about Dexter are on it.  Saxon also recorded all his kills on his computer.

Quinn comes to see Deb and offers her a ride to Dr. Vogel’s funeral.

Deputy Marshall shows up and tells Deb something weird happen a blond women showed up to Urgent Care with Harrison.  Deb tells him that it was her who brought Harrison in and the nurse at Urgent Care needs to check her eyes.

Everyone is leaving Dr. Vogels Funeral and then they head out for a drink.  Deb tells Dexter that everyone is going to miss him.  Tom comes over and tells Deb and Dexter that Harry would be proud of them.

Quinn tells Dexter that everyone is excited Deb is back.  Dexter tells Quinn that he does not want Deb to be alone now that he is leaving and he is happy she is back with Quinn.

The Real Estate agent calls Dexter to tell him that someone wants to sell the house, is ready to make an offer cash but has to meet the owners.  She wants Dexter to come over quick.

Angel tells Dexter he is not sure what the place will be like without him.  Dexter tells Angel he is a good friend.  Angel tell him he is glad he said that and then tells everyone in the crowd that they should let this be their goodbye to Dexter and he raises his glass in a toast.  Dexter is emotional and tells everyone he will miss them too.

Dexter shows up at his house and it is Oliver Saxon.  Dexter thinks, “again!”

Dexter tells Saxon that he think he can live with it.  Saxon is going to let the Real Estate agent he is going to make an offer.

When he leaves – Dexter says, “He wants me to get him walk, when he reminds me why I cannot!”

The Deputy Marshal  goes to see Elway and tells him he thinks Deb is hiding Hannah.  Elway finds it hard to believe, the DM tells him if he wants the reward he better listen to him.

Elway shows up at Deb’s house and apologizes for his behavior.  He pushes his way in Deb’s house and she throws him out.  Deb tells Hannah that she is sure Elway is on to her.  Hannah calls Dexter and lets him know.  Dexter gets to Deb’s house and tells them that Saxon showed up at his condo and threatened everyone.

Deb assures Dexter that she can take what Saxon throws at her.  Dexter tells them he has to handle Saxon.  Deb takes Hannah to a hotel to wait to leave.  Deb tells Hannah that she fells Dexter going after Saxon is a big mistake.  Both Deb and Hannah agree they love Dexter.  Deb tells Hannah to take care of Dexter and Harrison.  Deb drives off.

Dexter gets on the computer and is sending the videos of Saxon killing his victims to the police tip line.  Dexter is trying to get Saxon to him.  Harry appears and says he sees the old Dexter is coming back.  Dexter disagrees he says it is personal.

Elway and Deputy went through Deb’s house with a warrant and finding info about Argentina on the computer.

Dexter tells Harry his need to kill is less and less.

Vince’s daughter shows up and brings the DNA of Saxon to Quinn.  Quinn reads the report and sees it says Saxon is the son of Vogel.  Quinn puts out a warrent for Saxon’s arrest.

Deb is afraid if she f**ks up back at the force who will pick up the pieces without Dexter there.  He tells her she has a compass and as long as she listens to it she won’t need Dexter she will be fine.

Deb tells Dexter he should never think it is the code that made him a good brother – there is something in him.  He smiles.

Dexter asks Deb to leave he wants Saxon to come after him.

Saxon hears a news report that the police are looking for him and he says, “Fu*king Dexer,” and gets into his car.

Saxon enters Dexter’s condo with a knife and comes after a sleeping Dexter or so he thinks.  As he goes to stab Dexter, Deb comes up behind Saxon with a  gun.  Dexter tells Deb to leave.

Dexter has Saxon on his table next and they chit chat about women.  Saxon tells Dexter he hopes he does not stab Hannah in his sleep.  Dexter tells Saxon he loves Hannah and would rather be with her right now.

Dexter tells Saxon how much he has changed the moment before the kill use to be his favorite, but it is not anymore.  He tells Saxon he does not need to kill him.  Saxon tells Dexter to walk away, Dexter agrees he will. Saxon is excited that he will live.  Dexter tells him no, he will just die in the Electric Chair.

Dexter calls Deb and tells her to arrest Saxon.  He tells her she will be the hero of Metro Miami.  He tells her he has to leave, Debra asks him to hug her goodbye.  Dexter tells her it is just for right now and not forever.  Deb tells Dexter to go get on a place.  He tells her he will.  Harry appears and asks him if he is sure about it.  Dexter agrees he is.  Harry tells him he never thought this day would come, Dexter does not need him anymore.

Dexter gets into his car and drives away.

Deb calls in Miami Metro requesting backup.  Meanwhile the Deputy Marshall who has been following Deb goes into the room where Saxon is.  Saxon tells him to untie him a madman tied him up.

Deputy Marshall unties him and Saxon stabs him.  Deb walks in and pulls her gun Saxon shoots her, she shoots back but he gets away.

Deb goes down she has been shot, she calls in that she is down.

Dexter, Harrison and Hannah are ready to go to the airport.