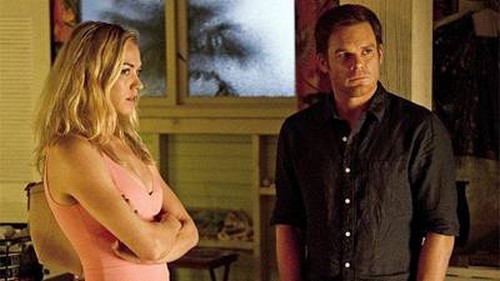 Tonight’s episode ended with Daniel telling Vogel that he knows what fear looks like because he’s seen a lot of people die.  There’s also a shocking death at the end of the episode, which you’ll definitely want to check out. So if you missed tonight’s episode you can read a full and detailed recap, right here.

Spoiler alert: If you’re one of those people who doesn’t like spoilers, stop reading now! We have some juicy spoilers for you about the season 8 episode 11 of HBO’s “Dexter”

Official Showtime synopsis of next week’s episode: “Dexter is going to be torn between fleeing the country with Hannah and Harrison, and taking Saxon out once and for all.”

On next week’s penultimate episode Dr. Vogel’s funeral will take place.  Dr. Vogel’s son Oliver Saxon stops by Dexter’s and almost does him in, but Deb saves him.  Deb & Dexter tie him up and Dexter calls Miami Metro so they will find him.

Dexter is moving ahead with his plans to move to Argentina and tries to sell his boat.  He also decides that his daughter Astor can have his car.  Something changes in this episode because we know in the finale Dexter is still in Miami.

In the video below, we see a somewhat frantic Dexter who seems to be desperately trying to figure out his life. The end of the promo finishes with Dexter washing blood off his hands and, with all the falling blood raindrops, we’re expecting another deadly episode. And, as the season heads towards its completion, the bodies are only going to be piling up.

Dexter episode 11, “Monkey In A Box” airs on Showtime on September 15th, 2013.   Check out the preview video below of episode 10 and let us know in the comments below what you think!  Are you enjoying season 8 of Dexter?