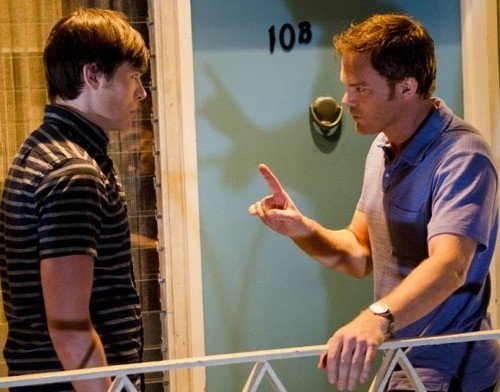 Tonight’s new episode of DEXTER was another great episode.  On tonight’s episode we get to know creepy Zack better and we found out that Dr. Vogel has been treating the boy and shock, she wants Dexter to teach Zack the code.  I can’t wait for next week’s episode to see how that is going to all work out.  We have managed to get our hands on a sneak peek video and some spoilers to wet your appetite for next week’s episode 7 “Dress Code.”

On tonight’s episode Zack was on Dexter’s radar, the kid was creepy and Dexter knew it, Zack was setting Dexter’s spidey sense off.  Dexter suspected that Zack killed Norma and he finally found the proof.  Dexter told Dr. Vogel that he wanted to kill Zack because he met the code.  Dexter also was aware Zack was stalking another women to kill.  Dr. Vogel felt that Zack had potential and she wanted Dexter to teach Zack Harry’s “Code.”   One of Dexter’s girlfriends returned at the end of the show.  Yes, it was Hannah and it looks like she drugged both Deb and Dexter, I wonder what she has in mind for the two.  If you missed tonight’s episode it was jammed packed full of action.  We did a full and detailed recap here if you want to catch up.

Spoiler alert: If you’re one of those people who doesn’t like spoilers, stop reading now! We have some juicy spoilers for you about the season 8 episode 7 of HBO’s “Dexter”

Official Showtime synopsis of next week’s episode:  Dexter tracks down Hannah to see why she is back in Miami. He also takes on a protégé and begins teaching him the Code.

On next week’s show it looks like Dexter gives in and decides to teach Zack, “the code.”   I am not a fan of Zack Hamilton, I don’t really see that he is like Dexter and I am not enjoying this storyline.  Zack seems far more reckless and creepier than Dexter and I bet he is going to end up getting Dexter into trouble.

Just when we thought things were getting back to normal for Deb and Dexter, Hannah McKay shows up.  Hannah is married again and we all know what that means.  Hannah is the black widow!  Dexter wants to know what Hannah is doing back in Miami.

Deb is feeling that the moment she asked Dexter to kill Hannah was the moment she started to lose herself and she tells Dexter again she wants Hannah dead and gone.  Dr. Vogel thinks Hannah and Dr. Vogel, two psychopaths together is not a good thing.  Dexter tells Dr. Vogel that Hannah is not a psychopath.

Vogel warns Dexter that before he takes matters into his own hands he better think about all the consequences of doing it.

Dexter episode 7, “Dress Code” airs on Showtime on August 11th, 2012.   Check out the preview video below of episode 7 and let us know in the comments below what you think!  Are you enjoying season 8 of Dexter?