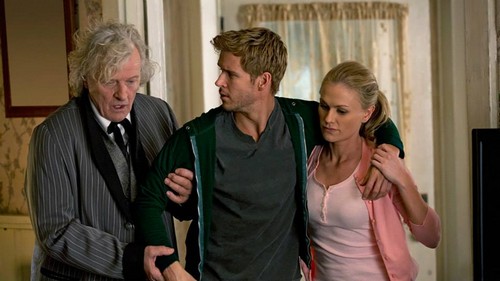 There are two main story-lines this season on TRUE BLOOD: the Vampire/Human war and the faeries.  On tonight’s show the war continued as Eric hit Burrell where it hurt.  In the faery storyline romance was in the air for Sookie and Ben but it ended with a surprise.  Another great episode, can you believe next week we are already 1/2 way through season 6?  If you just cannot wait for next week’s episode we have managed to get our hands on a sneak peek video and some spoilers to wet your appetite for next week’s episode 5 called “F*** the Pain Away”

On tonight’s episode romance was in the air as Sookie as she confronted her growing attraction to the mysterious Ben Flynn who is 1/2 fae, but quelle surprise, we found out he is vampire too.  We got a shocking surprise of who Ben actually is. Eric  countered Burrell’s brutal anti-vampire initiatives by hitting his nemesis where it hurts the most, his daughter who he turned into a vampire. Growing up all too quickly, Andy’s faerie daughters end up keeping dangerous company.  Bill had his eye on them for their blood but Jessica might have all ruined all that.  Sam and Nicole made a connection. Bill tasks Takahashi to synthesize a new kind of blood.  Did you watch tonight’s episode?  We did and we recapped it here for you.

Spoiler alert: If you’re one of those people who doesn’t like spoilers, stop reading now! We have some juicy spoilers for you about the season 6 episode 5 of HBO’s “True Blood.”

On next week’s show  Sookie is going to keep trying to get more information on her heritage although her fairy grandfather Niall has give her some answers that is not enough for Sookie.  Sookie is going to get Lafayette to try to summon up her dead parents ghosts so she can talk to them.  Lafayette wants Sookie to be sure this is what she wants to do.  Sookie needs to find her way back to the truth.

Sookie has Ben/Warlow in her crosshairs she has a ball of light and she is circling him telling him she has no idea why vampires feel the need to lie to her, threaten her and terrorize her in her own home.  Sookie knows he is Warlow.

On last week’s episode Jessica lost control and she sucked all Andy’s teenage daughters dry and next week she apologizes to Bill for what she did, meanwhile Andy is driving up.  Andy comes up to the house with his gun and calls Bill out.  Lets hope his daughters are alive.

Meanwhile Jason is going to have two ex-lovers show up next week: Sarah Newlin and Jessica who will be seeking his forgiveness.

Also Pam gets herself in some trouble next week, she has been sent to the camps.  An unlikely alliance Eric and Tara ban together to save her.  Although Eric and Tara do not exactly like each other they both love Pam.

True Blood episode 5, “F*** the Pain Away” airs on HBO on July 14th, 2012.   Check out the preview video below of episode 5 below and let us know in the comments below what you think!  Are you enjoying season 6 of True Blood?