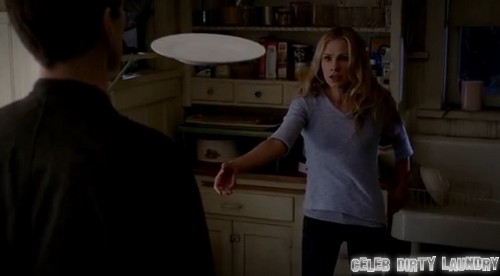 Tonight was another great episode of TRUE BLOOD and as usual there was tons of action.   Bill is still the big bad and learning more about his powers, Eric is not pleased that war has been declared on vampires, Jason has met his fairy grand-father and a whole lot more.  I cannot wait for next week’s show.  We have managed to get our hands on a sneak peek video and some spoilers to wet your appetite for next week’s episode 3 “You’re No Good.”

On tonight’s episode Louisiana Governor declared war on the vampires.  Meanwhile Lilith tells Bill that he must complete her work and Bill starts to realize just how much power he has. A long-lost relative reveals himself to Jason and Sookie, their fairy grandfather.  Their fairy-grandfather has been tracking Warlow and tells Sookie and Jason he is in Bon Temps.  After Tara is victimized by a new government weapon, Eric took matters into his own hands in an effort to thwart Burrell’s anti-vampire initiatives.

On the road to work, Sookie was drawn to a handsome stranger who shares her faerie abilities. Sam is unnerved by supernatural-rights zealot Nicole she is worried that now that war has been declared on the vampires it is only a matter of time before the Governor comes after shifters.  Sam was confronted by Alcide and Martha about Emma’s future. Bill contemplated the scope of his heightened powers.  If you missed tonight’s premiere episode we have a full and detailed recap available for you, here!

Spoiler alert: If you’re one of those people who doesn’t like spoilers, stop reading now! We have some juicy spoilers for you about the season 6 episode 3 of HBO’s “True Blood.”

Official HBO synopsis of next week’s episode: Eric decides to do something about Burrell’s blatant aggression towards vampires. Bill tests the limit of his powers and decides to get a TruBlood innovator to synthesize a new type of blood. Sookie starts to see the reason why Warlow is after her. Steve Newlin (Michael McMillian) finds his past ideals turning into a current nightmare.

On next week’s show Sookie is not pleased that Bill wants to synthesize her blood to make a new type of blood.  Sookie is still under the illusion that she can tell Bill what to do, but she soon finds out that is not the case.  She tells Bill that she knows he thinks he is God.  She says, “You think you are God Bill, but you are not a God, you are just an asshole!”   Bill feels he has to save vampires and tells Sookie that he plays by a different set of rules now. 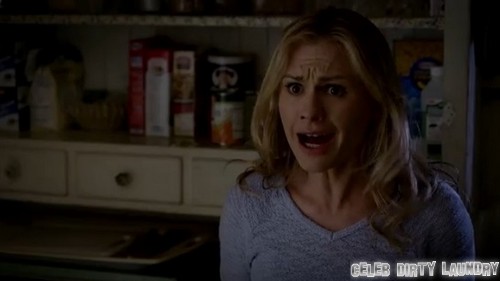 Eric (Alexander Skarsgard) takes a hostage and it is none other than the Governor’s daughter.  He is determined to get Governor Burrell to stop the torturing of vampires.  It looks like Burrell is willing to negotiate, but will it work? I have my doubts, Bill tells Jessica that many, many vampires are going to burn.  He saw it in a vision.

Meanwhile Sam tries to recover one, Emma from Martha and the Alcide.  He promised Luna he would protect her.  Sookie and Jason’s fairy grandfather feels Warlow around and Jason is ready to fight to protect Sookie.

True Blood episode 3, “You’re No Good” on HBO on June 30th, 2012.   Check out the preview video and some pics above of episode 3 above and let us know in the comments below what you think!  Are you enjoying this season of True Blood?