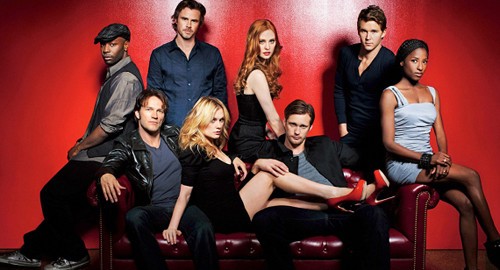 Tonight was the season 6 premiere of TRUE BLOOD and it was Fangtastic and we are wanting more! We have managed to get our hands on a sneak peek video and some spoilers to wet your appetite for next week’s episode 2 ‘The Sun.’

On tonight’s episode in the wake of Bill’s blood-soaked reincarnation, Sookie, Eric, Jason, Jessica, Tara, Pam and Nora flee the Authority compound as Sam, Luna and Emma dodge swarming guards.  Now packmaster, Alcide discovers that The Job comes with unsavory side dishes, but other major perks. In Bon Temps, Andy (Chris Bauer) deals with parenting four newborn human-faerie hybrids. Meanwhile, Louisiana Governor Truman Burrell vows open season on vampires. Jessica returns to Compton Place as Jason hitches a ride with an eerie stranger.  If you missed tonight’s premiere episode we have a full and detailed recap available for you, here!

Spoiler alert: If you’re one of those people who doesn’t like spoilers, stop reading now! We have some juicy spoilers for you about the season 6 episode 2 of HBO’s “True Blood.”

Official HBO synopsis of next week’s episode: A long-lost relative reveals himself to Jason and Sookie. After Tara is victimized by a new government weapon, Eric takes matters into his own hands in an effort to thwart Burrell’s anti-vampire initiatives. On the road to work, Sookie is drawn to a handsome stranger who shares her faerie abilities. Sam is unnerved by supernatural-rights zealot Nicole (Jurnee Smollett-Bell), and is confronted by Alcide and Martha (Dale Dickey) about Emma’s future. Bill contemplates the scope of his heightened powers.

On next week’s show now that the Louisiana Governor has declared war on the vampires next week’s show is going to be all about the vampires and how they are being tortured.  The war has begun.  Meanwhile Lilith tells Bill that he must complete her work and Bill starts to realize just how much power he has.

Tara has been shot by the Louisiana Governor’s soldiers and as Pam tries to comfort her, poor Tara is screaming about how much it is burning – it seems whatever they shot into her is a new government weapon.  Eric watches helplessly.

The humans are fighting and biting back, vampires went too far, but Eric is willing to go to war if that is what they want.  He is going to try to fight Louisiana Governor Burrell’s anti-vampire initiatives.

Jason confronts Warlow and is trying to kill him, but I doubt that is going to work out.  Sam is going to be in the picture next week when he is confronted by Alcide  and Martha about Emma.  Remember Emma is 1/2 wolf and 1/2 shifter.

There is tons more in the preview, you need to watch it.  I don’t want to give away anymore surprises.  Did you love tonight’s episode, wasn’t the end a shock, again?  Hit the comments and let us know your thoughts.

True Blood episode 2, “The Sun” on HBO on June 23rd, 2012.   Check out the preview video and some pics above of episode 2 and let us know in the comments below what you think!