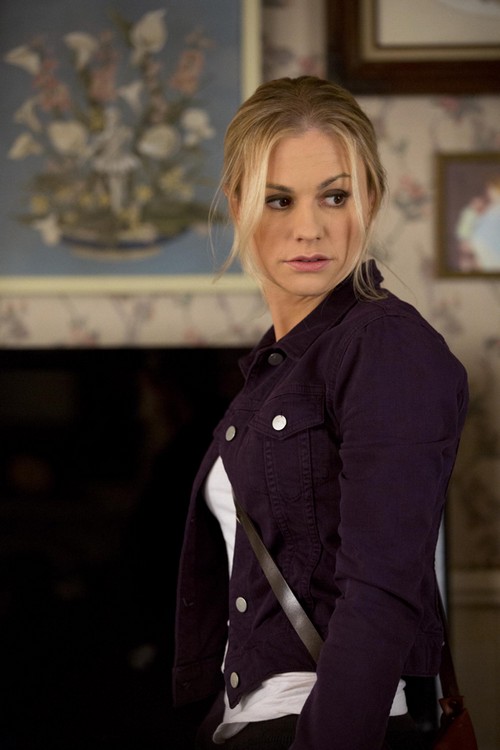 Season 6 of TRUE BLOOD has been fangtastic and we are down to the last three episodes and the action has not stopped. On this week’s episode Truman Burrell was killed and Sarah was determined to continue his mission.  Eric tried his best to save his sister Nora and when he could not it was heartbreaking.  A lot of our characters were in jeopardy at the end of tonight’s show and I cannot wait to find out what happens.  If you just cannot wait for next week’s episode like me, we have managed to get our hands on a sneak peek video and some spoilers to wet your appetite for next week’s episode 8 called “Dead Meat.”

On tonight’s episode Burrell was dead so that meant Sarah Newlin was running things at the Vamp Camp and she warned everyone that no one can know that Burrell died.  Can you imagine what it is going to be like with Sarah in charge?  The vamp camp has come up with a way to get rid of the vamps.  They have produced new True Blood and it is laced with Hepatitis V.  Willa warned Pam not to drink the blood.  I guess this is what Lilith was warning Bill about – how the destruction of the vampire race could come about.  It also looks like things are not going to go well for Pam’s psychiatrist at the Vamp Camp.  We know he likes Pam and she is ready to take full advantage of that.  Meanwhile Alcide is in trouble with the pack when he lied to them and Rikki calls him out.  Eric lost his sister, Nora, the scene was heartbreaking when he begged Bill and then Godrick to save her, sadly nothing could.  Did you see tonight’s episode?  We did and we recapped it here for you.

Spoiler alert: If you’re one of those people who doesn’t like spoilers, stop reading now! We have some juicy spoilers for you about the season 6 episode 8 of HBO’s “True Blood.”

True Blood is down to the last three episodes and of course Sookie is in another love triangle.  What would a season be without Sookie torn between men?  The two men in question this time are Bill and Warlow/Ben.

On next week’s show Sookie will have to decided whether she wants to broker a deal between Bill and Warlow, causing more issues between the three of them.  Bill believes Warlow is the key to saving Tara, Willa, Eric, Pam and Jessica.  Sookie goes to Warlow and tells him what she wants and he agrees to do it as long as Sookie agrees to be his forever.  Poor Warlow I guess he does not know Sookie’s track record with men, there is no forever.

Eric devastated that Nora is dead is raging at Bill because he did not bring Warlow back to save her.  Bill tells Eric that Sookie has Warlow.  Eric is not pleased and accuses Bill, the prophet of not wanting to pick a fight with his, “precious Sookie.”

Jason joined the LAVTF because he wanted to save Jessica.  Jason is now at the Vamp Camp and he will meet Violet.  Violet was the vampire who saved Tara and Jessica when the other vampires wanted to attack them.  When Jason is thrown into the gen population bleeding Violet claims Jason as her own, saving him from being devoured by hungry women.   Violet tells Jason she is going to feed off him as often as she wants. Yikes… what does this mean for Jason?

Meanwhile at the Vamp Camp most of the vampires are drinking the Hep V tainted blood.  It also looks like Bill’s vision is about to come true.  Sarah brings Jessica, Tara, Eric, Bill and Willa to the room where the roof opens and intends for them to meet the Sun.  Will Bill be able to save them or will his prophecy come true?  There have been rumors that another one of our favorite characters night die.

It looks like over with Alcide and the wolf pack things are not going great.  Rikki has Nicole and is slapping her around, Alcide does not look please, but there is nothing he can do about it.

True Blood episode 8, “Dead Meat” airs on HBO on August 4th, 2013.   Check out the preview video below of episode 6 below and let us know in the comments below what you think!  Are you enjoying season 6 of True Blood?