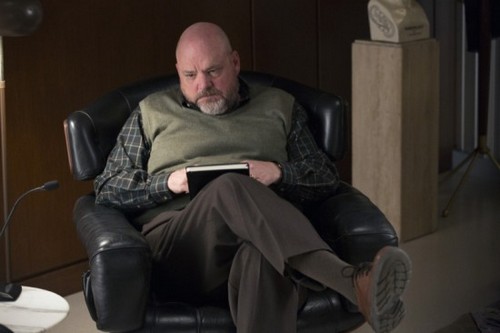 Tonight on HBO TRUE BLOOD continues with a new episode called “In the Evening.”  We are quickly racing towards the finale with only three episode left of season 6 after tonight’s show.  On tonight’s show Eric (Alexander Skarsgård) makes a last – ditch effort to save an ailing Nora (Lucy Griffiths).  A tragedy close to home forces Sam (Sam Trammell) to ignore Alcide’s (Joe Manganiello) warning and return to Bon Temps. Did you watch last week’s fabulous episode? If you missed it we did a review of the episode HERE. So head over there and you can get caught up before tonight’s episode airs.

On last week’s episode Andy gave his faerie daughter a name, or two or three or four.  His daughter wanted it that way because she does not want to forget her sisters. Arlene found a solution to Terry’s malaise, she decided to get a vampire to glamour him.  However, sadly the die had been cast and Terry’s buddy shot him :-(   Sookie was saved by Warlow, so when Warlow got summoned by Bil, Sookie took Warlow to a safe place.  When the night started to fall Warlow asked Sookie to tie him up because he was dangerous and could not control himself.  It seems during the day Warlow is a fairy and during the night he is a vampire.  By the end of the night Sookie who is still a danger whore ended up making out with Warlow.

On tonight’s show Burrell is dead so that means Sarah Newlin is running things at the Vamp Camp and she warns everyone that no one can know.  Can you imagine what it is going to be like with Sarah in charge?  The vamp camp has come up with a way to get rid of the vamps.  They have produced new True Blood for the vampires and it is laced with Hepatitis V.  Willa warns Pam not to drink the blood.  I guess this is what Lilith was warning Bill about and how the destruction of the vampire race could come about.  It also looks like things are not going to go well for Pam’s psychiatrist at the Vamp Camp this week.  We know he likes Pam, but looks like he is going to get his.

Tonight’s episode is going to be another bloody exciting one, which you won’t want to miss. So be sure to tune in for our live coverage of HBO’s True Blood Season 6 Episode 7 “In the Evening,” tonight at 9PM EST! Remember also to bookmark Celeb Dirty Laundry and check back here for our live True Blood recaps, reviews, news, and spoilers! While you wait for our recap, we have tons of spoilers and a sneak peek video for tonight’s episode, CLICK HERE …

Tonight’s episode opens up with Eric, Nora and Willa watching them ship out True Blood laced with Hep V.  Eric tells Willa to tell Pam not to drink the blood.  There has been a breach in the Vamp Camp.  As they try to contain the breach they realize that Eric Northman has escaped.

Eric and Nora are under the truck transporting the Hep V and make their way out of the vamp camp.  Nora is fading fast.  Willa wearing a doctor’s coat comes to see Pam.  Willa tells Pam that Eric sent her to save her – she tells Pam that the True Blood they are going to feed her is infected with Hep V.  Pam tells Willa that she should tell Tara and Jessica but no one else.

Willa asks Pam how they are treating her.  Pam tells her like a F*cking Princess, love Pam.

Willa heads back with the rest of the vampires so the powers that be don’t find out they are on to them.

Meanwhile Eric carrying Willa shows up at Bill’s house.  Eric tells Bill he does not know who he is but he saw Sookie stake him and he lived.  He tells Bill if he is god, he wants him to save Nora.  Eric asks Bill to give Nora his blood, Nora refuses to take it because it is Lilith’s blood.  Bill tells Eric they must honor her dying wish.

Next we cut to Sookie naked lying with Ben/Warlow naked.  She tells him that this is a first, “waking up with a man naked in broad daylight.”  Sookie tells Warlow that just because they had sex does not mean she is going to marry him.   Sookie starts to hear crying and she does not know what it is.  Sookie realizes she hears Arlene crying and she is in the cemetery, she is afraid something terrible has happened.

Sookie beams back to earth and runs to Arlene and hugs him she tells him how sorry she is.  Arlene tells Sookie that Terry was so much better since Lafayette’s vampire friend glamoured him.  Arlene is sobbing, she does not know what to tell her kids.  Sookie tells her she is one of the strongest persons she knows and she is going to get through.

Sam calls Lafayette and asks if everything is alright.  Lafayette tells Sam that Terry is dead, Sam is shocked.  Sam goes back to Nicole and tells her to call her mother and tell her to come and get her.  He is going back to Bon Temps and even though it is not safe because his friend died, not being there is not an option.

Sookie and Arlene come to her house.  Arlene gets mad at Lafayette and Andy pulls her away and offers to go with her when she talks to her kids.

Lafayette tells Sookie they have an errand to run.

Jessica is still at the vamp camp and some of the soldiers come and get her and bring her to Jason.  Jessica is shocked to see Jason – he tells her he has come to help her and he is going to get her out and not let her down.  Jason tells Jessica he wants to do right by her.  He asks her if she has stockholder syndrome (meant Stockholm LOL)  Jessica tells him she is okay and he tells her there is nothing right about what is happening at the vamp camp.  Jessica tells him he cannot stop bad things from happening to her, they do not live in that kind of world.  Jessica tells Jason she really wants to than the vampire who would not have sex with her.  Jason agrees to get him for her.

Back with Nicole – she goes into the bathroom while Sam is in the shower and opens the shower door and watches him.  She strips off her clothes and steps in the shower with him.  They start to make out – always time for sex on True Blood.

Sookie and Lafayette are at the bank and they go to the safety deposit box there is a letter for Arlene.  They open it and it is a life insurance policy.  Lafayette and Sookie realize that Terry had it all planned.  Lafayette tells her he thought he was doing the best thing. Sookie asks when was leaving your family behind the best thing.  They take the policy.

Alcide drops his father Jackson off, he asks Alcide if he wants to stop for a beer.  Jackson tells Alcide he realizes he has messed up so many times.

Nicole’s mother drives up to the hotel where her and Sam are staying and is glad to see her daughter.  Nicole assures Sam that she won’t mention anything about him, but won’t forget him and gives Sam her number.  They hug….

The Vampire, James who refused to have sex with Jessica comes in the room – Jessica asks Jason to leave she wants some privacy with James.  Jessica tells him when they brought her in she did the worst thing a human or vampire could do.  She thought all vampires were like that.  James tells her he believes vampires have a choice about how they behave.  Jessica asks James what they did to him for refusing to have sex with her, he shows her his teeth that they messed up.  Jessica tells James he should not drink the True Blood because it is laced with Hep V.

James tells Jessica about his regrets that they know they might die.  Jessica asks James to make love to her.  She has never had sex with a vampire and wonders what it feels like.  Of course James obliges – and they have passionate sex.

Eric comes downstairs and asks Bill how he day walks.  Eric tells Bill he did not want to come there, he tells Bill he will do anything he wants if he saves her.  Eric claims to believe Bill is divine.  Bill tells Eric he went into a state and he had vision that has come to pass and he can see the future.  There is still one vision that has not come – he saw Pam, Jessica, Tara and Eric in a circular room and they met the sun.  Bill tells Eric that it is Warlow’s blood that allows him to talk in the sun.  Bill tells Eric that they have to have Warlow’s blood to stop his vision from happening.  Eric promised Bill he will go back to the vamp camp if he saves Nora.

Bill goes up and feeds Nora his blood, but it does not seem to be helping.  Eric tells Bill to go and find Warlow and he stays with Nora.

Lafayette and Sookie come back to Arlene’s house – they find Arlene is drunk.  Arlene told the kids and they are doing okay.  Sookie meets Andy’s daughter and they read each other’s mind.  Holly’s boys come in and they get introduced to Andy’s daughter.

Lafayette asks Sookie what is going on with vampires walking in the daylight.  Bill comes over to Sookie and asks her for a word in private.  They leave together.  She asks Bill what he wants.  Bill tells her he needs Warlow’s blood to save Tara, Jessica and her friends.  Bill tells Sookie if he refusing her there will be blood on both their hands.  He tells her to bring him Warlow and soon.

Pam goes to see her psychiatrist, she tells him she was feeling confessional.  He asks her if she wants some blood, she refuses, he is surprised.  Pam tells him she is not hungry because she is horny.  He asks her how she rates her sexual appetite.  Pam tells him high, she was a whore in her past life and she fu*ks a lot.  The psychiatrist is getting excited.  Pam is playing with him.  He tells her he is very interested in her specific knowledge and wants inside her head.  She jumps on him and asks how deep he wants in her.  She agrees to let him in deep as long as he lets her in Gen Pop.

Sarah comes up to Jason and tells him she has a secret – the governor is dead.  She tells him that he has no leverage, the guards cut his wrist and they throw him in Gen Pop 1.  All the female vampires go crazy and Tara jumps in front of them and tells them to back off.  Then Violet tells the ladies that Jason is hers.

Eric is talking to Godrick and trying to get him to save Nora.  We get a flashback and then we see Nora get worse and Eric cry for her not to leave him and then Nora turns into a bundle of blood and she dies.  Eric sobs……. Bill walks in looking distraught.