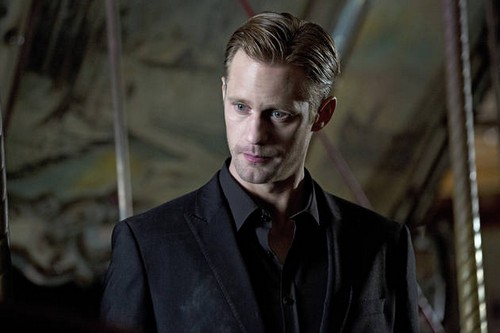 Tonight on HBO TRUE BLOOD continues with a new episode called “Don’t You Feel Me?” Can you believe we are already in the last couple of episodes of the season? On tonight’s show Andy gives his faerie daughter a name, or two or three or four. Arlene has a solution to Terry’s malaise, and Eric makes a startling discovery. Did you watch last week’s fabulous episode? If you missed it we did a review of the episode HERE. So head over there and you can get caught up before tonight’s episode airs.

On last week’s episode Sookie had Ben/Warlow in her cross-hairs she had a ball of light and circled him telling him she had no idea why vampires felt the need to lie to her, threaten her, and terrorize her in her own home. Sookie knew he was Warlow.  Meanwhile Jason had two ex-lovers show up: Sarah Newlin and Jessica who were seeking his forgiveness.  Sookie decided enough was enough and had Lafayette contact her parents.  Warlow told her they tried to kill her and she wanted to find out if it was true.  The answer she got from father shocked her.

On tonight’s show Bill decides to seek out Lilith for advice on handling the escalating human-vampire crisis. Eric, Pam, Nora, Jason and Jessica get up-close-and-personal glances at the perverse perils of Vamp Camp. Sam comes to a decision he hopes will be in Emma’s best interest. Andy gives his faerie daughter a name, or two or three or four. Arlene has a solution to Terry’s malaise, and Eric makes a startling discovery.

Tonight’s episode is going to be another bloody exciting one, which you won’t want to miss. So be sure to tune in for our live coverage of HBO’s True Blood Season 6 Episode 6 “Don’t You Feel Me?,” tonight at 9PM EST! Remember also to bookmark Celeb Dirty Laundry and check back here for our live True Blood recaps, reviews, news, and spoilers! While you wait for our recap, we have tons of spoilers and a sneak peek video for tonight’s episode, CLICK HERE …

The show begins with Lafayette drowning Sookie. Bill immediately has a feeling that something is happening to Sookie. Warlow finds his way to Sookie and saves her. Warlow wants to kill Lafayette, but Sookie urges him not to. Warlow blasts Lafayette with his fairy juice in an effort to release Lafayette of the possession. The attack is successful. Once the spirit leaves Sookie’s father, Sookie shouts, “Stay out of my life.”

Meanwhile, Eric and Pam are facing off at the Vamp Camp. They’re staring each other down. They both ready their stakes. They both float off the grown — yeah, I guess Pam can fly too. They fly up to the rafters where they stake two of the snipers. Eric pokes a hole in the glass with his stake.

Back at the pond, Billith summons Warlow. Sookie says that she can take him to a place where Billiths influence won’t encourage him. She transports him to some fairy world. Bill is distressed that his call has gone unanswered. He runs up the stairs to find Jessica; he realizes she’s not there and understands his prophecy might be coming to fruition.

Jason applies to work at the LAVTF. He’s simply trying to get on the inside of the Vamp Camp.

Meanwhile, Bill asks the doctor he’s captured to put him in a coma in an effort to commune with Lilith. He says, “You will drain me until I’m within an inch of the True Death.”

Nicole and Sam are in a hotel room with Emma. Emma’s having trouble understanding what’s going on and Nicole’s going crazy, telling Sam that he and Emma can’t run forever.

Meanwhile, Sookie and Warlow are in this magical fairy land. He asks her to tie him up, because he doesn’t want to accidentally attack her, feed on her. She ties him up with a vine and seals it with her freaking fairy light — apparently that fairy juice can do just about anything.

The hematologist begins draining Bill of blood. He enters a trance and Lilith appears.

Andy prepares for work; it’s night time. However, before he leaves for work, his only surviving fairy daughter asks to give her a name. Adeline-Brailin-Charlaine-Danica. She gets four because she wants to remember her sisters each time someone says her name. How sweet.

Someone knocks on Lafayette’s door. He answers it and it’s Terry. He hands him a key to a safety deposit box. Lafayette thinks Terry’s up to something. He calls Arlene, who gets off the phone upset. Arlene thinks that Terry’s going to kill himself, which seems to align with the plan he was creating last episode. Arlene talks with Holly, who has an idea to enlist the help of vamp to help him forget about his pains, troubles, etc.

Back in this strange fairy world, Warlow chats about how long he’s been waiting for Sookie. He says that he’d be willing to tear up the contract that he created so many years ago. He says he wanted to turn Sookie into a vampire because they could be together forever, and feed together forever, never having to hurt another living soul, which Warlow despises. He hates the monster he’s become.

At Vamp Camp, Eric is locked up. The governor brings in Nora, whom they are going to inject with a new disease called Hepatitis V. Eric’s forced to watch her die.

Bill meets Lilith; she talks in cryptic riddles. He asks where the white room is. She says the time to act is now; she says everything’s on him and to not return to see her for more answers.

Sam calls Emma’s grandma. Sam says that he’ll give her back to her as long she doesn’t return to that pack; she agrees. She says, “That pack’s not my pack no more.”

The vampire Holly called enters Terry’s home. He helps Terry forget everything. But that’s still not going to change the fact that his “friend” is going to kill him. Last episode, Terry and the friend made an agreement that the killing would be at some undisclosed moment. Terry won’t see it coming. Ahhh. Now what’s going to happen to Terry?

Back at Vamp Camp, Jason’s getting an intro to his new “job.” He’s telling his vampire killing stories, so hopefully he doesn’t forget his goal to rescue Jessica and everyone.

The governor enters his newly turned daughter’s room. She asks for her father to put her in with the general population. He thinks the research they’re doing might be used one day to cure vampirism. She says she wants out of solitary.

Alcide finds Sam, and he’s fairly pissed. Alcide’s father is lurking behind the corner. Alcide finally backs down and tells Sam and Nicole to leave now, for good. He says that if he or Nicole show themselves in Bon Temps or Shrievport again then they’re dead.

Meanwhile, Bill’s fed up with everything. He wants to go get Jessica. Bill takes Warlow’s fairy blood and walks into the daylight.

Jason’s brought into a room where he’s forced to watch a copulation experiment. He says that doesn’t matter, but then they bring in Jessica and another vampire. His name’s James. He’s hesitant because he doesn’t want to take advantage of Jessica. They begin zapping him with UV light. Ms. Newlin eventually calls the experiment off, thinking she’s riled up Jason just enough.

Terry walks outside to take the trash out. He opens the dumpster and he gets shocked. Arlene runs to his side and just strokes his face. She begins singing to him as he dies.

Bill walks into the governor’s backyard. His security details open fire, but Billith easily takes them down. He — wait for it — RIPS OFF THE GOVERNOR’S HEAD. Yikes.

In the prison, governor’s daughter and Tara are playing Connect Four. She’s being summoned by Eric. She successfully gets to the holding room and releases them from their bindings. They take on the disguise of a prisoner, doctor, and guard and start to rescue Pam and Tara. Nora isn’t doing so well after being infected with the new vampire disease, Hep V. Eric walks into a production room and sees that all the new Tru-Blood being produced is being spiked with Hep V — an attempt to poison all the vampires.

Back in fairy land, Sookie says everyone thinks she’s a “Danger Whore.” She says that maybe everyone’s right, and that she recognizes Warlow needs to feed. She gives him her neck; he bites it. Then she, um, bites his neck and begins sexing him up. He’s still tied up but, well, that doesn’t matter. They have sexy time in fairy land. As they have sex, some major fairy light happens. We don’t know what that means, but it’s probably something fairly (fairy) significant.

So Terry and the Governor have officially bit the dust! Tune in next week to see what happens next!