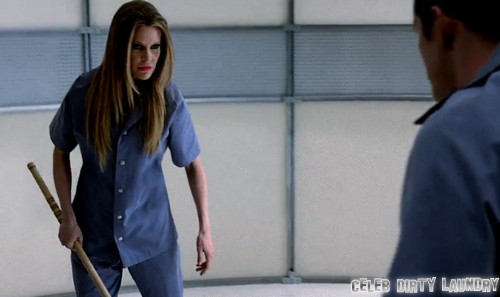 Season 6 of TRUE BLOOD has been all about constant action and tonight’s episode was no exception.  What a crazy episode!  Sookie contacted her parents and found out the truth, which did not please her.  Pam got a new therapist and Tara and Eric got themselves caught to save her.  If you just cannot wait for next week’s episode like me, we have managed to get our hands on a sneak peek video and some spoilers to wet your appetite for next week’s episode 6 called “Don’t You Feel Me?”

On tonight’s episode Sookie has Ben/Warlow in her cross-hairs she has a ball of light and she is circling him telling him she has no idea why vampires feel the need to lie to her, threaten her and terrorize her in her own home.  Sookie knows he is Warlow.  Warlow tells her that she is her destiny.  In pops Bill and takes Warlow away, seems that Bill/Lilith is his maker.  Meanwhile Jason had two ex-lovers show up: Sarah Newlin and Jessica who both were seeking his forgiveness.  Sookie decided enough is enough and has Lafayette contact her parents.  Warlow told her they tried to kill her and she wanted to find out if it was true.  The answer she got from father shocked her.  So much more happened in tonight’s episode and if you missed tonight’s episode you can read our full and detailed recap right here!

Spoiler alert: If you’re one of those people who doesn’t like spoilers, stop reading now! We have some juicy spoilers for you about the season 6 episode 6 of HBO’s “True Blood.”

True Blood is already 1/2 way through the season and the action keeps rolling.  On next week’s show we are going to find out what happens to Sookie.  At the end of tonight’s show her father was drowning her.  Of course we know that is not going to work out.

Jason is on his way to the Vamp Camp to save Jessica, I wonder how that is going to turn out.  At this point we have Nora, Pam, Tara, Jessica, Willa and Eric at the Vamp Camp.  Next week Pam and Eric are going to have to unleash their inner gladiators.  Pam finds out that Eric made another vampire, Burrell’s daughter Willa and she is not pleased.

But it looks like Pam’s anger at Eric is all a ploy and at one point we see that Eric has broken through the two-way window and he is threatening Steve Newlin who claims he had nothing to do with it. (blabbing to Burrell that Eric was Pam’s maker)

Meanwhile Burrell is determined to fix his daughter Willa.  Not sure how he is going to do that?  He tells Willa he is going to try to fix her and she accuses him of playing God.

Bill goes to look for Jessica and cannot find her and realizes that the war against the vampires is escalating and the vampires are not winning.  Bill accuses Lilith of being the reason everything is happening.  Lilith is going to have to take Bill down a notch.

Terry has gotten his friend Justin to agree to kill him  but on next week’s show Arlene comes up with a solution to Terry’s troubles.

True Blood episode 6, “Don’t You Feel Me?” airs on HBO on July 21st, 2013.   Check out the preview video below of episode 6 below and let us know in the comments below what you think!  Are you enjoying season 6 of True Blood?