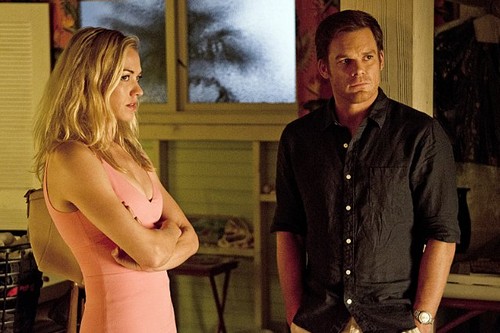 Tonight’s new episode of DEXTER was great!  Dexter was still obsessed with Hannah and the brain surgeon returned.  If you are curious about next week’s episode we have managed to get our hands on a sneak peek video and some spoilers to whet your appetite for next week’s episode 9 “Make Your Own Kind of Music.”

On tonight’s episode Dexter decides to help Hannah leave the country.  Dexter is obsessed with Hannah again.  Not only was Dexter trying to help Hannah he was trying to find Zach who had left for the Florida Keys.  Dexter suspected that Zack killed Cassie.  Angel offered Deb a job at the precinct.  Dexter and Hannah headed to the keys to find Zack.  Meanwhile Deb had a GPS under Dexter’s car and was following him.  When Dexter and Hannah got to where Zack was staying they found it was set up like a kill zone.  After some investigation Dexter realized that Zack did not kill Cassie someone else did.  Zack had the kill zone set up to kill someone from his high school who bragged about killing a girl.

Dexter went to dispose of the body Zack had in his trunk and Hannah stayed behind, Deb showed up and confronted her.  Deb tries to citizen arrest Hannah but Hannah tells her that she loves Dexter and Dexter loves her and if Deb turns her in she will hurt Dexter.  Deb stormed out.  Hannah, Zack and Dexter headed back to town and stopped at Dr. Vogel where they all had dinner.  So much more happened on tonight’s episode and there was an unexpected ending.  If you missed tonight’s episode you can read a full and detailed recap, right here.

Spoiler alert: If you’re one of those people who doesn’t like spoilers, stop reading now! We have some juicy spoilers for you about the season 8 episode 9 of HBO’s “Dexter”

Official Showtime synopsis of next week’s episode: Dexter investigates a murder.  Meanwhile, Dr. Vogel gets the surprise of her life when someone from her past returns.

On next week’s episode Deb is back on the police force and working as a detective for Angel in homicide.  Meanwhile, a Federal Marshall shows up looking for Hannah McKay.  Dr. Vogel and Dexter are working together to try to find who killed Zack, or so it seems.  Dexter feels like Zack is trying to send him a message.

Quinn is pleased that Deb is back on the force and tells her so and then moves in for the big smooch.  Quinn tells Deb that he thinks Zack killed Cassie, but Dexter tells Deb that Zack is dead.

I suspect Dr. Vogel is the brain surgeon, what do you think CDLers??

Dexter episode 9, “Make Your Own Kind of Music” airs on Showtime on August 25th, 2012.   Check out the preview video below of episode 9 and let us know in the comments below what you think!  Are you enjoying season 8 of Dexter?