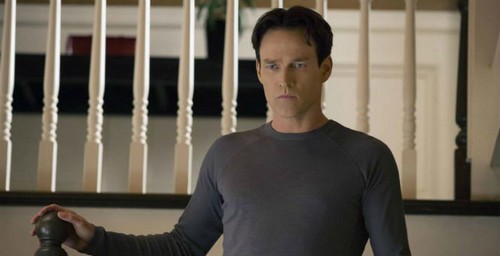 Season 6 of TRUE BLOOD is rushing toward the finale as the penultimate episode called, “Life Matters” airs next week.  There is so many things left to resolve, they are going to have to jam pack each of the remaining episodes with tons of action.  If you are like me and you are anxiously awaiting each episode, we have managed to get our hands on a sneak peek video and some spoilers to wet your appetite for next week’s episode 9 called “Life Matters.”  So sink your fangs in and enjoy!

On tonight’s episode  Sookie faced a major dilemma in deciding whether to broker a deal between Warlow and Bill.  Bill saw Warlow as the answer to saving the vampires from destruction.  Sookie spoke to Warlow and he named his price, eternity with Sookie.   Sookie finally decided she did not want to be laid next to her parents when she died since they wanted to kill her.  She decided to give into Warlow’s demands and be with him for eternity in return for him helping her friends.  However Bill nor Sookie counted on Eric’s interference.

Over in vamp camp, Jason got to know Violet, while Sarah went to extremes to keep Tru Blood flowing.  Sarah certainly was determined and she by the end of the show she beat an Osaka spokesperson to death.  Alcide  made a decision that  impacted the futures of Nicole and Sam.  Sam found out that Nicole was pregnant before Nicole knew.  Tonight’s episode was awesome so much more happened.  If you missed tonight’s episode you can read our full and detailed recap, right here.

Spoiler alert: If you’re one of those people who doesn’t like spoilers, stop reading now! We have some juicy spoilers for you about the season 6 episode 9 of HBO’s “True Blood.”

On next week’s episode time is running our for Jessica, Tara and the rest of our favorite vampires.  They are in the octagon room and it seems they are about to meet the sun (the true death).  Can Bill or Lilith save them?

Eric is fuming after the death of Nora and he is headed back to the vamp camp ready to do some damage.  Now that he has drunk Warlow’s blood he is more powerful than ever and he is going to be hard to stop.  I am betting that Sarah Newlin is going to be on his radar.  Especially since there is a scene with someone sticking a knife into her neck and Sarah screaming, “What will become of your soul?”
Eric holds her responsible for killing Nora.

There have been rumors floating around that Eric gets killed but I am certain that cannot be the case.  But we did see Sookie giving a eulogy on a Comic Con trailer so you never know, but seriously I think the eulogy is for Terry.

In Bon Temp next week friend and family remember Terry who was killed two weeks ago.  It is a very emotional storyline, so make sure to have your tissues out.

Bill wants to take Warlow from the faerie place that Sookie has him, Sookie is not interested.  Warlow took a lot of damage at the hands of Eric and Sookie does not think he is shape to save all man kind.  Bill does not really give a crap what kind of shape Warlow is in, he just wants him to save Jessica, Pam, and Tara.

There are many other scenes in the preview, all fast paced moving, check it out below and let us know what we missed!

True Blood episode 9, “Life Matters” airs on HBO on August 11th, 2013.   Check out the preview video below of episode 6 below and let us know in the comments below what you think!  Are you enjoying season 6 of True Blood?