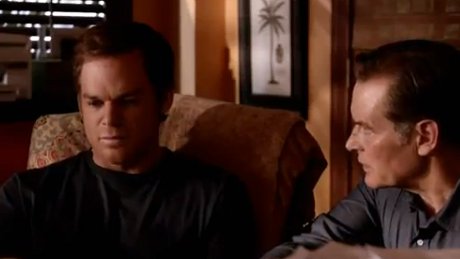 Dexter season 8 will be returning this summer for an epic installment that is sure to leave fans of the show breathless and hungry for more, more, more! Dexter has been a show that people have really gotten into, primarily for the enticing plot — filled with twists and turns and gasps — as well as the unusual protagonist who harbors a strange set of morals. The promo trailer comes at us paired with a super thrilling sneak peek at the upcoming drama Ray Donovan, which stars Liev Schreiber as the main character. In that show, Liev is the ultimate fixer, and tries his hardest to be the go-to man for rich people with problems that don’t seem to go away.

The promo for Dexter season 8 doesn’t reveal all that much about the upcoming season; however, it does do a splendid job of reminding fans why they’ve fallen in love with the show. It also does some good work reminding us all what happened in the previous season and, for those who haven’t gotten caught up, highlights a few major plot points without totally spoiling the dramatic twists.

Showrunner Scott Buck told TV Guide that he’d be excited to explore Dexter’s origin story a bit more. In other words, return to his childhood. “We’ve heard Harry’s version of what happened and we’ve seen some flashbacks, but I think we can widen the scope of that and see that Dexter had a slightly different beginning than even he imagined. I think it became a very interesting story and it’s not just flashbacks, but it’s how all of that impacts and affects his life as it is now. It’s not just looking backwards; it’s actually very much moving forward in an interesting way.”

I think it would be wonderful to get more details about Dexter’s full character, and the backstory could deliver some powerful material. What do you think? What are you looking most forward to with the return of Dexter? Let us know, Dexter fans! Dexter Season 8 premieres June 30th on Showtime. The Ray Donovan premiere will immediately follow.