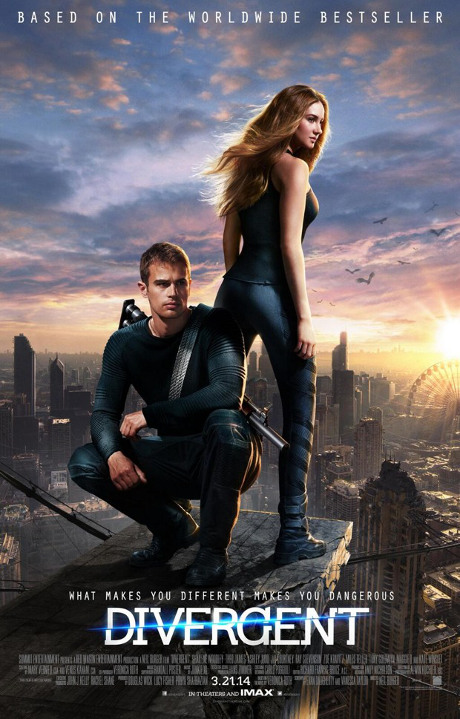 In Hollywood’s desperate attempt to find the next massively successful YA film franchise, it probably made the right choice when choosing to take a chance on Veronica Roth’s bestselling Divergent trilogy. The books, which have tirelessly been compared to The Hunger Games, feature Tris — a young girl living in a dystopian society where individuals are “sorted” into factions based on rudimentary personality traits: Abnegation (The Selfless), Candor (The Honest), Amity (The Peaceful),  Erudite (The Intelligent), and Dauntless (The Brave).

However . . . . It’s not long before the main character, young Beatrice “Tris” Prior, manages to totally screw up the Testing System. When she qualifies for more than one faction, she’s classified as Divergent — a dangerous, dangerous thing in this society’s eyes (to find out why, you better read the books — no spoilers here!).

For those who’ve read the books, it’s hard not to draw similarities between Tris and Katniss Everdeen, both extremely strong and capable heroines who manage to, quite literally, change their worlds. But which lovely, fierce heroine comes out on top? If you’re familiar with the stories, let us know in the poll below! It’s Katniss vs. Tris. Who gets your vote?

Also, a fabulous trailer was just released. Check that out below. The movie stars Shailene Woodley as Tris — alongside Kate Winslet, Theo James, and Maggie Q. Opens in theaters and IMAX everywhere March 21, 2014. We’re so excited!