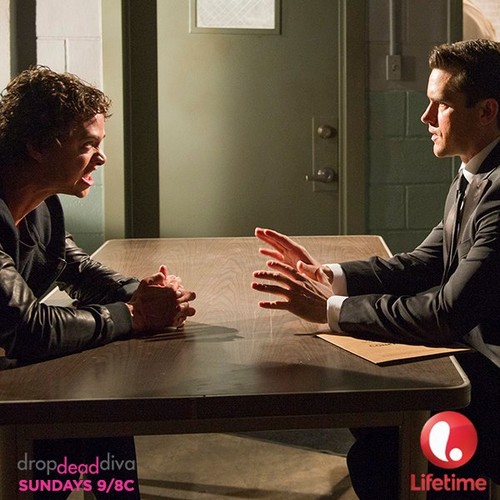 Tonight on Lifetime DROP DEAD DIVA continues with a new episode called, “One Shot.” On tonight’s showGrayson represents a man who hires him to draft an unusual “Love Contract” between him and his new wife.  Did you watch the last episode?  We did and we have a full and detailed recap, right here for you.

On the last episode Jane represented a woman in a personal injury lawsuit that occurred during a wife-swap exercise while in couples’ therapy. A man who incorporated himself hired Grayson and Owen when his shareholders prevented him from marrying the woman he loved. Paul set Jane up on a blind date in hopes of sparking a new romance. Stacy and Owen questioned their new feelings towards one another.

On tonight’s show Jane defends a woman who has to go into witness protection after she’s caught in the middle of a drug bust. Owen represents a teen-star whose reputation is put at risk after a risqué photo is taken of her. Grayson represents a man who hires him to draft an unusual “Love Contract” between him and his new wife.

Tonight’s episode is going to be another great one, which you won’t want to miss. So be sure to tune in for our live coverage of Lifetime’s Drop Dead Diva Season 5 Episode 11 “One Shot,” tonight at 9PM EST! Remember also to bookmark Celeb Dirty Laundry and check back here for our live Drop Dead Diva recaps, reviews, news, and spoilers!  While you wait for the recap, check out a sneak peek of tonight’s episode below!

The Jane/ Stacy/Owen saga continues. Jane is hurt that Stacey couldn’t understand she crossed a boundary. It was one thing for Owen to be her sperm donor but now to play happy families will be too much for their friendship. She thinks Stacey is selfish and Stacy thinks Jane doesn’t want her to find love. They both have men in their lives to say that maybe they should view things from the other person’s view and yet they aren’t at the stage where they want to listen.

To help take her mind of her imploding friendship a former client has returned. Rebecca had come to Jane years ago for real estate matters but this time she arrived because it was a life or death situation. She spotted cocaine at the flower shop she works at. She took a picture and called her boss to notify him. When he arrived she saw he was carrying a gun and decided it was best to take off. After hearing her story, Jane knows her life is in danger and takes her to the authorities.

It appears a case was already against the boss and with Rebecca’s testimony they could put her boss behind bars. Unfortunately it’s too late for Jane’s client. The guy could have told friends about her so her life is still in danger. They need to put her in witness protection right away. Rebecca doesn’t want to but she has to if she wants to live.

Later on Rebecca’s boyfriend showed up at Jane’s office. He hasn’t heard from his girlfriend in a long time and he’s worried. Jane tries to play it off that she never saw her but he spotted Rebecca’s sweater in the chair. Jane refuses to admit to anything but she will pass along a message.

Grayson is happy in his infatuation with his new girlfriend when he gets a new client. A very rich man wants to have a love contract not a pre-nup. A love contract would be a way for him to stipulate how his trophy wife must act. She can’t gain over two pounds per year and she has to sleep with him at least once a week. Grayson thinks it’s ridiculous but there is precedent.

Another new case belongs to Owen. A photographer came upon a teen sensation undressing. He took a photo and then tried to blackmail the young woman with the picture. If she doesn’t pay then he’ll put it in art show. Owen tried to get an injunction but only has 24 hours to prove that removing the photos wouldn’t hurt the photographer’s first amendment.

Stacy helps him with the case. She was able to figure out that his client was posing for photos when she got snapped “unaware”. He sees her privately without her father there to intervene. He wants to know why did she pose. It seems she wanted off her show. She wanted to go to college and her dad wouldn’t allow her to. This way she could get out of her contract without being sued. Own understand a dilemma and is going to help her do the “Natalie Portman”.

Jane got called in to see Rebecca. She’s refusing to relocate until she gets to talk to her boyfriend. Her handlers want Jane to convince otherwise when she instead tells them Rebecca is allowed to say a final goodbye. Technically she hasn’t entered a contract yet so it’s allowable.

She sets up a meeting her office late at night. There’s no one there except for her and Grayson who’s working on the love contract. Rebecca was barely there when shots went off. Rebecca was hit and the Feds believe it was Rebecca’s boyfriend that set it up.

The moment Rebecca wakes up and finds out what happened; she doesn’t believe it. She wants Jane to prove Neil’s innocence. Jane goes to see him in prison. She knows Neil owed Rebecca’s boss ten grand. The money was a loan and used to buy Rebecca an engagement ring. That’s all he claims.

Jane is confused on whether or not to trust him. She gets some advice from Grayson and he tells her not to rely on her emotions. For added assistance he’s going to help her check over the paperwork. During their investigation Grayson finds out that Neil wasn’t the one that turned Rebecca over to the shooter. It was Grayson’s client. The man that claimed he wanted a love contract.

Owen helped his star go to college. He told her father that if she went to college then she couldn’t be fired. He left out the part where he got the photos destroyed but all done in the name of education.

Grayson and Jane help reunite Rebecca and Neil and even stand as witnesses to their marriage. This way the couple can go into the program together. After such a romantic moment it’s sad when Grayson goes on romantic vacation with his girlfriend. To make herself feel better she goes to get a mani-pedi and finds Stacy getting the same. It’s hard but Jane wants her friend to be happy too. They make up.

Paul and Owen had tried to get them back together only to find they weren’t needed. The two ladies spend the rest of the night watching trashy TV.