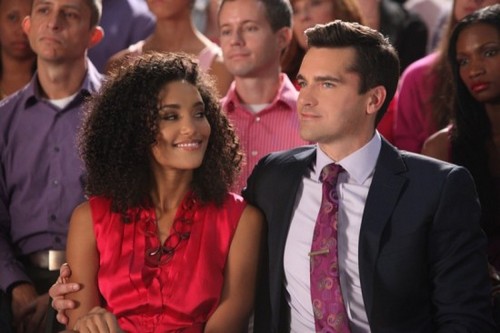 Tonight on Lifetime DROP DEAD DIVA continues with a new episode called, “Guess Who’s Coming.” On tonight’s show Stacy suffers an awkward humiliation at yoga class, a chivalrous Owen comes to her rescue.  Did you watch the last episode?  We did and we have a full and detailed recap, right here for you.

On the last episode Jane defended a woman who had to go into witness protection after she’s caught in the middle of a drug bust. Owen represented a teen-star whose reputation was put at risk after a risqué photo is taken of her. Grayson represented a man who hired him to draft an unusual “Love Contract” between him and his new wife.

On tonight’s show Jane represents Deb’s mother, Bobbi Dobkins, in a scandalous case involving sex solicitation. Owen sends Grayson on a field trip to Wyoming where he has to try a California client’s case under Wyoming law. Nicole and Grayson’s relationship takes a turn. When Stacy suffers an awkward humiliation at yoga class, a chivalrous Owen comes to her rescue.

Tonight’s episode is going to be another great one, which you won’t want to miss. So be sure to tune in for our live coverage of Lifetime’s Drop Dead Diva Season 5 Episode 12 “Guess Who’s Coming,” tonight at 9PM EST! Remember also to bookmark Celeb Dirty Laundry and check back here for our live Drop Dead Diva recaps, reviews, news, and spoilers!

Jane who normally loves her work is hesitant to go in. She doesn’t want to see Grayson and Nicole all over each other. Sure, she’s working through seeing Stacey and Owen together but she’s not big enough to handle Grayson moving on. Surprisingly she in luck. Grayson has to leave the state for a while. Owen had given him a case in Wyoming. He has to go and settle a divorce. Jane was passing him on his way out. Before he goes though, he says he wants to take her to dinner. He wants to talk outside of the office.

Jane doesn’t have to obsess about what he might say because she got big news. Deb’s mom got arrested. What’s even more shocking it the charge. She tried to pick up a male prostitute. Bobby didn’t know she was picking up a prostitute. It could hurt her job. After all she teaches children. If the parents found out she might lose her business.

Jane is intent on getting Bobby out of jail but the assistant that is supposed to be assisting is in over her head. Nicole can’t seem to keep track of anyone’s messages. What’s going on with her? Later she apologizes to Jane explaining she let relationship issues get in the way. Jane of course wants to know everything. It’s how she learns Grayson broke up with Nicole. He had told her she wasn’t the one.

This is good news for Jane. She couldn’t drop the charges for Bobby and when they tried to make a deal she couldn’t accept it. The deal would have hurt Bobby’s business. Now she can fantasize about what Grayson has to say to her. Stacey is all on board as well. She went through something difficult as well. She went to yoga with Owen and soon found her yoga pants were completely see through. What’s worse is that someone took a picture and posted it on Instagram.

Owen helped her out by speaking to pants manufacturer. He managed to get her a gift card and an apology. She’s still at the office when Jane and Bobby return from court. Jane left them alone to catch up. That’s when Stacey learned Bobby had a procedure. She enlarged her G-spot and every now and then she gets a rush of sensation.

Later Bobby and Jane are talking when the conversation veers to Grayson. Jane had said he was closing to find love and Bobby said it was impossible. She told Jane that Grayson was never going to get over Deb. The two disagreed and Jane said Bobby wouldn’t understand what with all of her bed hopping. Her remarks went too far and Bobby leaves in a temper.

They forgive each other later on. Bobby was simply being protective of Grayson. It’s going to be hard for her to see with anyone else besides Deb. All forgiven and back to court things should have been running smoothly. Unfortunately Booby got one of her sensations during her testimony. Everyone thought it was a heart attack. Bobby tells Jane the real reason at the hospital. She admitted she lost her drive and that’s why she got the shot.

Jane understands and is able to turn the G-spot into a defense. Her client was suffering from heightened sexuality and therefore was unable to make sound judgment. The judge accepts it and the case gets thrown out.

Owen exposed himself in the defunct pants in front of the whole yoga’s class. He did it to make Stacey feel better. Stacey loved that he did that. That’s why she wants to breakup. She’s never had a successful relationship and she doesn’t want to ruin the friendship she has with Owen. Especially with them having a child together. He agrees but let’s her know he’s going to fight for her.

Grayson was able to win his case in Wyoming. His client got a fair deal once they proved the ex-wife was trying to defraud him because she was having an affair with her lawyer. He arrived back home in good spirits and went to have drinks with Bobby and Jane. That’s when Bobby sees it. She saw how Grayson looked at Jane. She told Jane to go after him. Grab her chance while she can.

Jane was close to doing that when Stacey interrupted. She told Jane that her other mother was in the hospital. Jane has to be by her side.