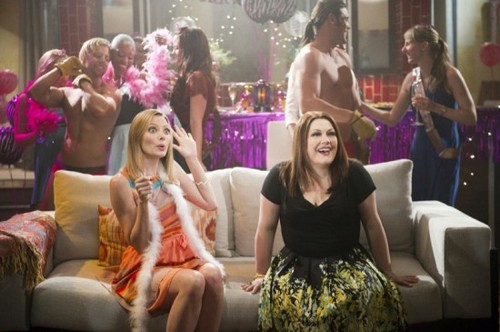 Tonight on Lifetime DROP DEAD DIVA continues with a new episode called, “50 Shades of Grayson.” On tonight’s show a bachelor party gets out of control near the U.S./Mexico border and Jane must get the groom back into the U.S. in time for the wedding.

On last week’s show Jane and Grayson represented pageant contestant, Donna, when she was stripped of her crown after claiming the Miss Universal Globe competition had been rigged. As Kim’s due date approached, she represented her formerly estranged father, Larry, when he lost his job coaching a little league team. Stacy continued her crusade to convince Jane that Owen would be her ideal sperm donor. Grayson and Nicole struggled to define their relationship.

Tonight’s episode is going to be another great one, which you won’t want to miss. So be sure to tune in for our live coverage of Lifetime’s Drop Dead Diva Season 5 Episode 8 “50 Shades of Grayson,” tonight at 9PM EST! Remember also to bookmark Celeb Dirty Laundry and check back here for our live Drop Dead Diva recaps, reviews, news, and spoilers!

Jane and Stacey have a fun and sticky time at their friend’s bachelorette party. Certainly the strippers provide some much needed fun. Stacey is lapping it up. She is about to get inseminated so she wants to have as much fun as she can. Too bad the fun was ruined by the groom of all people. He doesn’t bust up the party physical however once the bride found out he was arrested she was no longer in the party mode.

Jane’s friend’s groom is ruining his own happy end. His groups of friends were partying too hard. So hard the groom can’t remember what happened between the time he took shots and the time he woke up in jail without his shoes. The bride isn’t happy with his answer and the wedding is only going through because she still loves him… for now.

The whole situation could have been a bust if Jane didn’t at least meet someone. He’s nice and handsome. The best part is that he’s also a lawyer. The worst part is that after viewing her case he tell her that her odds are winning are low. Her groom made the drunken mistake of getting on the wrong line and he can be sent back to Mexico for a minimum of 5 years. Fortunately he’s willing to help her with the case.

If only Kim and Grayson got the same help. They thought they would be suing one person only to find out that the publishing company hired a team of writers. It’s now up to Kim and Grayson to find concrete proof that they stole their client’s work.

All of this is on top of meeting with Mr. Tuddle. Mr. Tuddle, the insurance adjuster is raking through the firm’s files with the world’s smallest comb. He’s asking about Kim’s maternity leave and Owen’s relationship with Jane. Nothing is off limits with this man.

The groom is facing more charged than Jane keep up with. His best man used his credit card to pay for a hooker. He’s willing to tell the judge that but the border department doesn’t believe him. The lawyer Jane is going up against appears to be truly enjoying persecuting the groom. There’s one little hiccup in the blatant witch hunt. The hooker received a deal if she fingered Jane’s client. Jane uses that to get the girl to crack. She wins that part of her case but deportation is still looming.

Her new “friend” helps yet again this time in exchange for a date. They do have a good date although Jane rushes off after getting kissed. She wasn’t ready to start something new to begin with and that was before she felt absolutely no sparks with Luis. It’s not her and it’s not Owen. He’s old news. It’s Grayson. She’s ready to admit she’s in love with Grayson.

Stacey’s baby making plans are interrupting Owen’s life. She showed up during a Mr. Tuddle’s visit with boxers (they help his swimmers) and then she brought a cup. He couldn’t make the trip to the fertility clinic so she asked him to use the public bathroom. He couldn’t do it. That turned out to be good thing seeing as Stacey wasn’t ovulating. She was just wearing her pink tinted shades as she read the stick.

Kim and Grayson do finally get help. From their client of all people. Her book was based on actual events in her life. The author, Cindy, has had an adventurous sex life. Reading snippet from her journal can help prove the publishing stole her life rights. However its true getting pregnant women hot can induce labor. Kim’s water broke in court.

A good thing for Kim the judge allowed her to continue with her closing argument via webcam. Immediately after she delivers a healthy baby.

Jane wins her case but she might have lost Luis as a friend. He tried to piggyback her case in a fight against the Department of Immigration. She kicks him off her right around finding new evidence. Jane manages to get her client off of all charges. Which was lovely for her client and the final nail in the coffin for Luis. Maybe he’ll think about using women the next time.

Stacey does ovulate and she does get implanted. Weirdly enough in her mind she goes on to tell Jane that she can stop feeling guilty about Owen. It’s time to go after Grayson. Jane is rushing to tell him what she feels when she sees making out with the assistant slut. She’s probably not a slut but Jane will be calling her that for the near future to make herself feel better.

So many shake-ups too little time. It’s not only Grayson’s feeling that are up for sale. The firm is as well. That’s right Parker is selling the firm and he wasn’t man enough to tell the partners himself. He sent in the secret Mr. Tuddle.