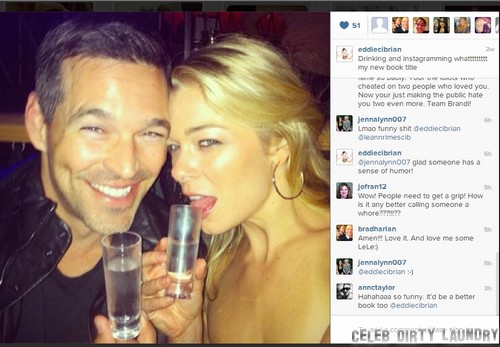 Will the feud between Brandi Glanville and Eddie Cibrian and wife LeAnn Rimes ever die? We certainly hope not, because it sure is entertaining enough!

As you already know, Brandi wrote a book called Drinking & Tweeting: And Other Brandi Blunders. Well, some nefarious fan (or non-fan) decided to create a fake Instagram account in Eddie’s name to stir the pot of drama even more. From the account, a photo was shared of Eddie and LeAnn sipping on some drinks with the caption, “Drinking and instagramming whatttttttt my new book title”.

Apparently that was legit enough for Hollywood Life, who decided to run with the drama. Of course, it would be a funny little quip — if it were true. It wasn’t even salacious enough for Brandi to offer any commentary on it on her Twitter account. For that, we are bemused.

Did you think for a minute that it was real? Besides all of that, do you think that their feud is ever going to die? Sound off with your thoughts in the comments below.