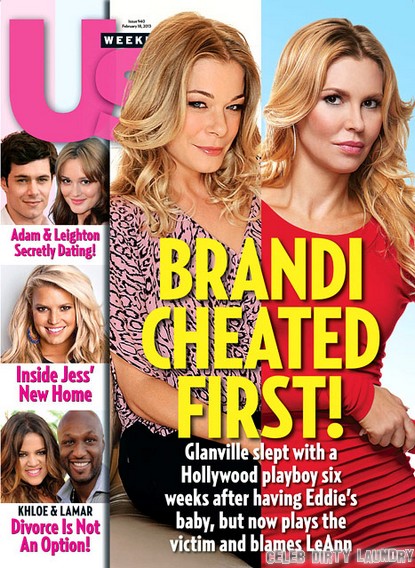 Just when we really started to feel badly for Brandi Glanville in the whole LeAnn Rimes and Eddie Cibrian cheating scandal and we’ve learned that she actually cheated on him first! Can you believe that?!?

She recently detailed the heartbreaking moment that she came to the realization that Eddie and LeAnn were having an affair. In her memoir, she went into excruciating detail about how LeAnn flirted with her husband right in front of her, but this story has a twist. Apparently Brandi isn’t the victim that she’s letting on.

In fact, Us Magazine is reporting that Brandi was actually the first to cheat on Eddie. The tabloid reports:

Indeed, multiple sources exclusively confirm in the new issue of Us Weekly (out now) that Glanville, 40, cheated on Cibrian, 39, several times during their eight-year marriage. In one particularly shocking incident, Glanville had sex with another man in her bedroom just six weeks after the birth of son Jake, now 5.

One source said, “Brandi loves to play the victim, but she doesn’t tell the whole story.”