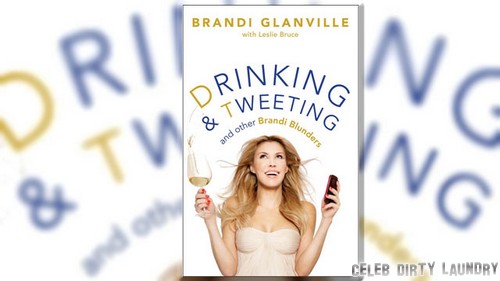 Brandi Glanville is coming out with her new book, Drinking & Tweeting And Other Brandi Blunders on February 12th. Inside of the memoir, she talks about the time when she realized that her former husband Eddie Cibrian was cheating on her. Sad! We’ve ordered the book and we are sure it’s going to be a good but heartbreaking read.

In the book, she talks of the moment that she realized Eddie was hooking up with country singer LeAnn Rimes. She talks of traveling to Calgary where Northern Lights was filmed so that she could meet Eddie’s TV co-star. So there was a double date which included LeAnn’s former husband Dean Sheremet.

She writes, “And this woman, whom I had just met, spent more time flirting with my husband than acknowledging her own. And Dean, bless his heart, ate his sushi, laughed at all the right moments, and pretended that he didn’t see exactly what was in front of him. As the evening progressed, every time LeAnn made some sort of inappropriate advance toward my husband – a whisper, a giggle, or a reach across the table, every so often, to offer me a nervous, overly tongue-y kiss to gauged my current state of mind.”

Brandi goes on to write that she wanted to push the cheating thought out of her mind, telling herself that LeAnn was “just a child star who had married young and was unhappy with her own marriage.”

It was that night that she came to the realization that Eddie and LeAnn were having sex. She writes, “When later that same night, LeAnn awkwardly pulled my husband (not hers!) onstage for an awful karaoke rendition of Sonny and Cher’s ‘I Got You Babe’, I just about lost it. Was she serious? I felt like I was in the Twilight Zone. Being the devoted housewife and trusting partner, I wasn’t going to say anything to them, but I knew that kind of tenacity didn’t come from nowhere. I looked at Eddie’s smiling face on that stupid, low-rent stage and leaned over to Dean and said, ‘You know they’re f**king, right?'”

Of course, Dean didn’t respond to her statement, which sealed the deal for Brandi that he also knew what was going on between Eddie and LeAnn. The final straw came when LeAnn offered up something completely inappropriate to Eddie right in front of her.

She writes, “LeAnn had ‘accidentally’ smeared some cake frosting on her top (she was still a bigger girl and completely flat-chested at the time) and asked my husband, not realizing that I was standing behind the both of them, if he’d wanted to lick it off her. This woman asked my husband if he wanted to eat the frosting mess she’d dropped on her nonexistent chest? Are you f**king kidding me? He hadn’t realized I was there either, and he laughed with hungry eyes at the suggestion.”

Brandi says it was at that time that she got in between them and asked, “‘What the f**k do you two have going on? Do you two have something you’d like to tell me?’ LeAnn laughed through her oversized dentures before purring, ‘Oh, honey, you’re just being silly.'”

She then took that as a sign that it was time for her to hop on a flight back to Los Angeles, but Eddie was in touch with her the following day. She writes, “He convinced me I was just being paranoid. I even asked him about the frosting incident, and he told me, ‘You see and hear things that don’t actually happen.’ I wanted to believe him so desperately that I let him convince me that I just made it up in my head.”

It was shortly thereafter that Eddie and LeAnn were busted by a tabloid sharing kisses at an intimate dinner. After nine years of marriage, they called it quits in 2010. Eddie and LeAnn married in 2011.

Are you going to pick up a copy of Brandi’s book? The tales of the wandering penis never cease to amaze us.