Brandi Glanville Calls LeAnn Rimes An Alcoholic, When Will The Feud Stop? 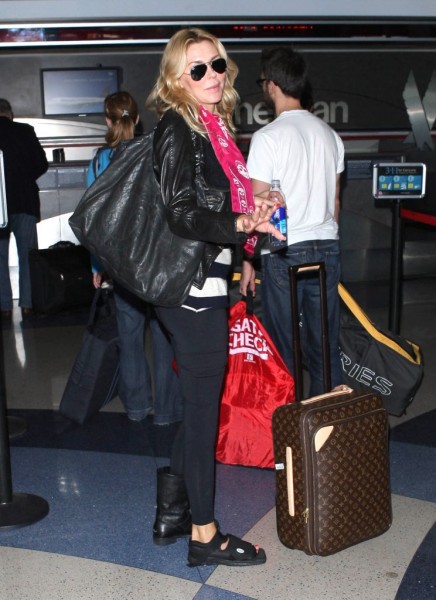 Now I love a good bitchy feud just as much as the next guy but this is getting pretty ridiculous. Eddie Cibrian responded to Brandi Glanville’s claims yesterday that LeAnn Rimes is mentally unstable and living with an eating disorder but he didn’t manage to diffuse any of the tension. He only made it worse. This latest freak out stems from the fact that one of Brandi’s kids found LeAnn’s laxative on the floor and ate it thinking it was candy. He got sick over it sending Brandi on a no holds barred quest to set everyone straight on the “country cunt” that is LeAnn Rimes (Brandi’s fantastic words, not mine).

Eddie did what we all assumed he would – defend his current wife and that just pissed Brandi off to no end so she unleashed another horribly insightful and rather colorful tirade. Have you asked yourself what you are going to do with your life when this feud is over? I don’t even want to think about it!

Anyway, according to Radar Online,  Brandi tweeted, “My kids are my life.. However, ur wife is a [expletive] and addicted to laxatives that Mason got sick on. Your ‘close friends’ talk sh*t about u and ur wife ALL the time… Leann is horrid she is addicted to laxatives and aderol [sic] has severe metal issues and [redacted] who was all to ready to spill on both of you and to me lovingly refers to Leann as angelfish because she sings like an angel and drinks like a fish.

“I’m a great mom and [redacted] saw nothing other than that. You want to talk narcissism??? U two are both the best examples of that. Why don’t u man up and find ur balls and get ur country c*** off twitter she is a wreck and spiraling down fast!!! The kids love her but they don’t realize she is putting them in danger!!!!!! MAN THE F**K UP eddie put the tequila down and be a proper parent.”

I don’t know what I like more – country c-unt or Anglefish. I’m actually surprised LeAnn hasn’t responded yet but has instead left the dirty work to Eddie. That’s not usually her style. Perhaps she’s embarrassed? I would be since Brandi’s outing all her little bad habits. I believe them too because LeAnn seems like a big ‘ole mess and Brandi seems like a loud mouth. Why would Brandi make this stuff up especially since kids are involved? You could ask why Brandi is saying these things (true or not) when her kids are involved but I never said she was smart. I just said I don’t think she’s a liar and there’s a difference.

Was Brandi right to call her an alcoholic? LeAnn Rimes has been taking a lot of hits lately. Does Brandi want to send her back to rehab with all this emotional twitter stress?

Attached – Brandi on her way out of LAX. Doesn’t she look a whole lot like LeAnn there? Creepy….