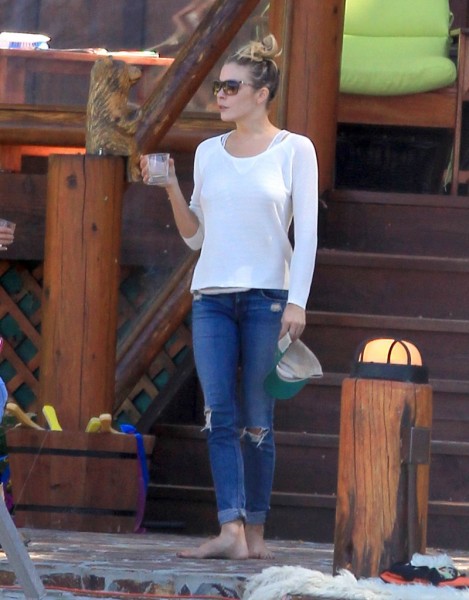 I love Brandi Glanville! It’s like I keep saying – no filter! And it keeps getting better and better. In an exclusive interview she updates everyone on LeAnn Rime’s eating disorder and how she continues to put Brandi’s children in danger with her unstable lifestyle.  I’m not going to cut this interview up too much. Your day will be better by reading the entire paragraph. Trust.

She told Us Weekly: “There’s a lot more that’s going on recently since LeAnn went into rehab, or wherever it is she went. A lot more than people know. I don’t have communication with [Cibrian and Rimes] because I don’t get responses when I reach out. I only get responses when I put it on Twitter. Twitter seems to work. That is the life they chose. Something happened with my son that nobody knows about . . . I know that my kids love her, and I know that she’s upset. I, unfortunately, don’t find her to be stable and I don’t want her around my kids when Eddie’s not there — or at least the nanny, his parents, someone. Mason, my eldest, ate some of Le’s candies and got extremely ill. And Le’s candies are laxatives. It was a big fucking deal for me, and I lost my mind. Mason told me about it, and then Eddie’s assistant, who was working for me at the time, also told me about it out of concern for my children. I emailed, emailed, called, called — no answers. Couldn’t even discuss it. He refuses to even be in the same room as me. He can’t have a parent-teacher conference if I’m there. I don’t know how to do this when I can’t talk to the father of my children and his new wife. I don’t know what to do.

“LeAnn has a severe eating disorder. She has [a laxative] in every purse. Mason found one on the floor and thought it was a Skittle! They don’t keep sugar in the house. He thought he finally found candy! He gets extremely sick, and that freaks me the fuck out.”

She went on to say, “She’s not healthy. And until she’s healthy, I don’t want her around my children by herself. Eddie is a proper human being. He’s a good dad, he’s smart, he doesn’t have an eating disorder, he doesn’t have mental issues, he’s a normal person, and I want him to man up.”

Amazing, right? Who says that kind of stuff to the tabloids? I can understand Brandi’s frustration though. It seems like Eddie and and LeAnn are trying to freeze her out of the parenting process. How can you co-parent if the other person won’t talk to you? That’s messed up and unstable. LeAnn Rimes is a special kind of crazy, right? I totally believe the laxative stories. That biotch is way too skinny and you know it’s not natural. Brandi has every right to get pissy about that. I love that she called the pills LeAnn’s candy. Again, you can’t make this shit up!

Is LeAnn Rimes anorexic? Should Brandi be worried about her children around this woman or is she just looking for more publicity?