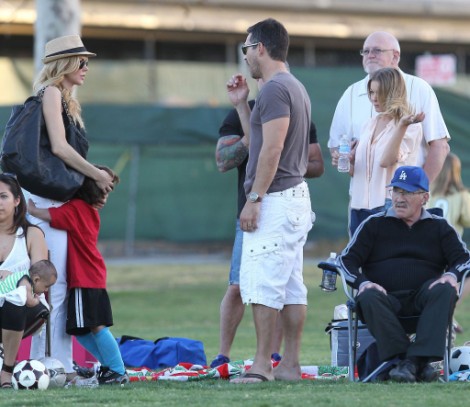 Brandi Glanville and LeAnn Rimes are at it again and, surprise surprise, it’s all being played out on Twitter. It all started yesterday when LeAnn tweeted about her upcoming show. She told fans, “Flying out with my boys in a few hrs…. Love that it’s a family tour weekend. It’s always more fun when they are with me” and then “Off to Seattle with the 3 cutest boys ever! It was a last minute family trip, the best kind!! #tour.”

Well Brandi obviously didn’t like that homewrecker talking about his sons and, as always, couldn’t help herself from striking back. She tweeted, “‘Someone is trying 2 get under my skin by calling MY children ‘her boys’ Sooo transparent! They R MY boys, Eddie Boys and ur step-sons… 4 now.”

Dang! Them’s fightin’ words! I love Brandi Glanville. She can’t handle her shit and her filter is nonexistant. It’s amazing. But it doesn’t stop there! LeAnn apparently didn’t like Brandi’s tweet and taunted her with gorgeous photos of “her” family vacationing in Oregon. One of the photos featured Eddie Cibrian with his sons and the caption read, “Boys making our fire” which isn’t the worst thing in the world but still a little knife – twist.

So do you think Brandi stayed quiet? Of course she didn’t! She finished off the latest 2nd grade bitch fest with “Taking a break from Twitter to breathe and punch some pillows.” Do the pillows have LeAnn’s face on them?

Seriously biotches, you need to either make nice or unfollow each other on Twitter. It’s as simple as that. I do believe LeAnn uses her step kids for attention so I get where Brandi’s coming from but I wish she didn’t play it out for the public so much. It makes her look bitter and sad and I prefer to only think of LeAnn Rimes that way. The “4 now” comment is priceless though. Does Brandi know something LeAnn doesn’t? It is safe to say the whole world might know something LeAnn doesn’t? Are you tired of the Brandi Glanville blasts? I’m definitely not.