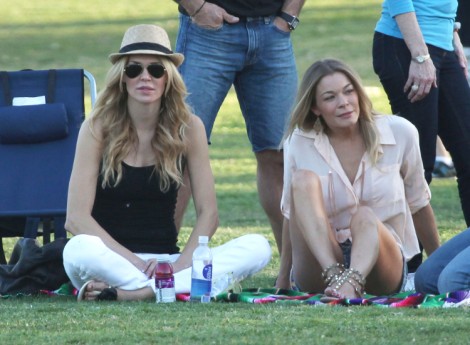 You knew that “support” she gifted the press wasn’t going to last right? Brandi Glanville hates LeAnn Rimes! The homewrecker’s “anxiety and stress” issues are like Christmas came early for Brandi. She could have sat in her ivory tower, laughing at the LeAnn backlash and called it a day knowing her ex-husband’s current wife finally got what she had coming to her with all the cyber bullying and affair worries. But that’s not how Brandi rolls. That’s way too high road. Instead, she made a crack at LeAnn on Twitter because Brandi truly can’t help herself.

Last night the Real Housewives of Beverly Hills star sent out two tweets that didn’t mention LeAnn but even Stevie Wonder could see they were directed towards her. She wrote: “Maybe I should sue you for this bullying tweet!! #owners**t,” and “If I sued every person that ever harassed me on twitter I’d be a GAZZILIONAIRE!”

True dat. Obviously she’s making fun of the fact that LeAnn is suing school teacher Kimberly Smiley and another woman for invasion of privacy, insisting Smiley taped a phone conversation they had.

We don’t have to get into LeAnn’s craziness. She has problems. That’s evident. Do you have issues with Brandi making these pretty unnecessary comments? They seem a little odd since earlier this week she told Us Weekly, “I totally support LeAnn’s decision to enter rehab – my top priority is my children, and at the end of the day we are a family. LeAnn is their stepmom, and they love her. I am wishing her all the best and I Hope she will find what she is looking for while in rehab.”

I get the fact Brandi hates the woman. Who among us wouldn’t? But she just offered her support and knows her children love her. Why the low blows? I’m all for hatin’ on a dumb ass but kicking someone when they’re down and have obvious mental problems is just not as fun. Come on Brandi! I thought you were better than that. You won! Word on the street is that LeAnn’s really freaking out because she thinks Eddie’s cheating. Does it even matter if it’s true? The relationship can’t be that great if she thinks her man is stepping out. Brandi has a front row seat to the inevitable sh-t storm. All she has to do is sit pretty and wait. But she couldn’t even do that! Now she looks like a heartless b-tch who is still jonesin’ for her ex. I love Brandi on the show. She actually seems like a down to earth person compared to those other rich b-tches but sometimes she doesn’t know when to reel it in. Bad move.

What do you think of Brandi Glanville’s twitter comments? Do they lack empathy or does she have the right to crack a few jokes at LeAnn’s expense?