Is Brandi Glanville The Happiest Woman In The World? 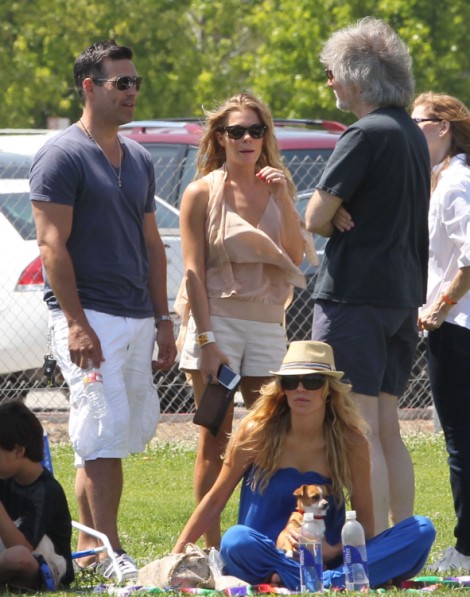 Now I know you should never gloat when someone you know checks themselves into a facility for “stress and anxiety” but what if that person cheated with your husband, broke up your family and twit pics half-naked pictures of herself on a regular basis? I’d say go for it! No offense to LeAnn Rimes and all but if Brandi Glanville isn’t laughing herself silly this morning over her scrambled egg whites than I don’t know what!

The women have had their share of back and forth cattiness since Eddie Cibrian was caught making out with LeAnn a couple years ago. LeAnn tried to salvage her homewrecker reputation by playing the doting wife and soccer mom to Brandi’s two boys and Brandi actually came off looking bitter and sulky! True, Brandi did some dumb ass things like slashing her ex-husband’s tires and refused to ever think about taking the high road but, damn, can you blame her? Eddie was all about the double standards and refused to let Brandi show their kids on Real Housewives of Beverly Hills but allowed LeAnn to post pic after pic on Twitter. Apparently, Radar Online is reporting that Eddie had a problem with LeAnn’s twitter usage but she was “out of control!” B-tch has been out of control in so many ways for a very long time.

So is Brandi vindicated? She must think so because she actually came out offering LeAnn support. She told Us Weekly, “I totally support LeAnn’s decision to enter rehab – my top priority is my children, and at the end of the day we are a family. LeAnn is their stepmom, and they love her. I am wishing her all the best and I Hope she will find what she is looking for while in rehab.”

I’m sure she actually means that. Why kick someone when they’re down? But you know she’s inwardly snickering especially since news outlets are saying LeAnn was freaking out because she thought Eddie was cheating on her. Once a cheater, always a cheater, right Brandi? Or maybe she feels a little guilty because the cyber trolls that were “bullying” LeAnn were pro-Brandi? I’d be so disappointed in Brandy if that was the case!

Do you think LeAnn’s marriage will continue once she’s out of her treatment facility? She’s not the stablest branch on the tree. You don’t go around bragging about being anorexic if you’re super confident and content. She’s got problems and it seems like Eddie’s finally catching on to them. And Brandi can only be supportive in front of the public. But she’s got to be all like, “See dude? This is who you left me for! And you thought I was crazy!”

Do you think Brandi is secretly overjoyed about LeAnn Rimes’ problems? Is that sick or is it just the truth?