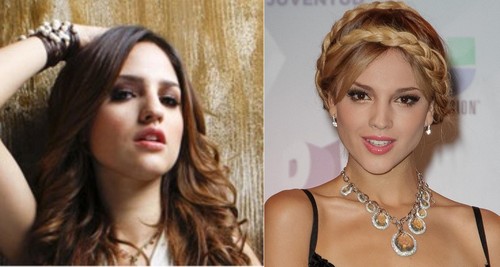 Liam Hemsworth has a new girlfriend, and she’s Miley Cyrus‘ Mexican double. I’m actually not even joking, Eiza Gonzalez is actually known as the Miley Cyrus of Mexico.

Just like Miley, Eiza started off as a pop singer on her own popular teen sitcom. She shot to fame with the sitcom, but started gaining notoriety because of her raunchy music videos and rumored plastic surgery. Take out the plastic surgery, and you have Miley Cyrus 2.0.

Anyway, Eiza’s past has come back to haunt her as her fame grows in the US – the side effect of dating one half of a former celebrity couple. Eiza is reportedly infamous in her native Mexico for getting massive amounts of plastic surgery and changing her face completely, and some overly harsh commentators even call her the ‘Michael Jackson’ of the Mexican entertainment scene.

I ended up researching her, and while I would definitely not equate her plastic surgery to Michael Jackson, she does look like a definite person. When she initially started off as a teen star, she looked like a normal person. However, over the years, it’s obvious she lost massive amounts of weight, got her teeth fixed, her skin fixed, her nose fixed, and her lips plumped. While some of the physical changes could be a result of her losing weight, there’s no way her nose and lip managed to transform themselves this way.

I do have to say that whatever surgeon she went to was obviously very skilled at his job, because unlike most of Hollywood, she actually looks good. The results of the plastic surgery won’t be visible to anybody who isn’t clearly searching for it and doesn’t have before and after photos of her. Obviously, the news of her plastic surgery has sparked comments from haters in social media forums, and many fans are comparing her unfavorably to Miley.

What do you guys think? Is Miley ‘better’ simply because she hasn’t had this much plastic surgery? Do you think Liam even cares about that? Let us know your thoughts in the comments.